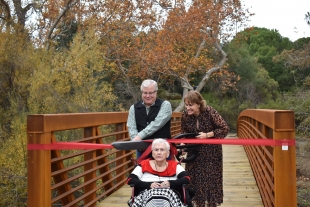 Tri-Valley residents can now walk, bike and hike along a 44-mile trail winding from Livermore to Fremont, following the recent completion of a new footbridge at Sycamore Grove Park that provides the final connection to 25,000 acres of open space.

"This is truly something monumental in the Tri-Valley with benefits that ripple across a much greater area and into future generations," Alameda County Supervisor Scott Haggerty said in a recent social media post.

He also thanked supporters and added that he looks "forward to seeing you on the trails."

Located on the Arroyo del Valle Trail near the Arroyo Road entrance leading to Sycamore Grove, the bridge was built as part of the ambitious "Valley Trail Connections" project, which started in 2014 with the purchase of the 74 acres of land where the trail connects. The Arroyo Road entrance had been closed since mid-July until recently for its construction.

Haggerty said the bridge is "fittingly" named after former county supervisor Ed Campbell, his "treasured mentor" and friend who died in 2002.

"May this footbridge inspire all of us to build bridges, connect paths and preserve the beauty of the Tri-Valley -- just as Supervisor Campbell did during his time in office from 1984-1996," Haggerty said.

The new bridge will be open year-round for visitors on foot, bike and horseback, and is also accessible to strollers and wheelchairs.

Thank you for the article and pictures of the new bridge in Sycamore Grove Park. Two corrections: picture #3 says Sycamore Grove is in Pleasanton, it is (obviously) just outside of Livermore. The trail the bridge connects not only runs to Fremont, as the article stated, but the trail actually continues all the way to Milpitas.

5 people like this
Posted by Scott
a resident of Another Pleasanton neighborhood
on Feb 11, 2020 at 12:01 pm

Can someone explain or map where this bridge is, exactly? I have read about it a few times but can’t determine where it is in the park. Thank you!

Repairing a Disagreement with your Beloved & “Physical” vs. “Social” Distancing
By Chandrama Anderson | 0 comments | 914 views