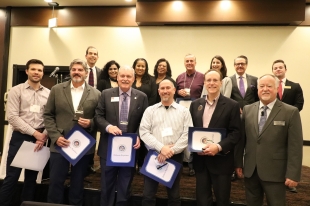 Multiple local businesses and individuals were recognized for their contributions to Pleasanton's public schools during the first-ever State of the School District luncheon at the DoubleTree by Hilton Hotel in Pleasanton last month.

"We are here to celebrate our A-plus schools," said PPIE executive director Steve McCoy-Thompson, who also called the luncheon "an opportunity to celebrate things going on in the district" and to recognize "some real stalwarts of the community that we are very grateful to (have)."

The inaugural district report was also formally introduced by Haglund, which mainly comprised of Measure I1 updates, results from the School Quality Stakeholder Survey, and the district's recently improved credit ratings and chart-topping Niche.com rankings.

Various state and national awards from the past year for student accomplishments, including two Golden Bell Awards from the California School Boards Association, were also highlighted in the report.

"We have great students, students that when they are given an opportunity to challenge us, they push us and ask us to do more. But not just us -- they challenge each other and push each other to be better," Haglund said.

At one point, Haglund asked every table to pause and discuss among themselves "how do we demonstrate the traits listed in our vision," which the district outlines on its website as a "resourceful, resilient, responsible and engaged world citizen."

Notable also attendees included Pleasanton City Council members Kathy Narum, Jerry Pentin and Karla Brown; Assemblywoman Rebecca Bauer-Kahan (D-Orinda) was originally slated to appear as well but was called to a last-minute meeting in Sacramento. Instead, Bauer-Kahan shared a video recorded message with the audience, in which she praised PUSD for their "incredible education value" and for working year-round "finding extra funding to fill the gaps."

"I am happy to recognize our business leaders going above and beyond," Bauer-Kahan said.

A four-minute video with various PUSD staff during the event's program illustrated the support that PPIE has given during its 33-year history to close funding gaps in Pleasanton schools for -- among other programs and resources -- support counselors, intervention specialists, librarians, and STEAM grants.

McCoy-Thompson said that "by all accounts, the lunch was a success," and that he fully intends to bring the event back next year.

Nearly a dozen Pillars of Pleasanton awards were given that day to local businesses that have contributed to PUSD schools; the categories are divided by industries such as retail, medical and real estate.

This year's winners, and their categories, included:

* Made to Order (Rex Shoemake), Retail

Its great to hear about the wonderful accomplishments of PUSD. It doesn’t surprise me at all-we really do have great schools

I agree that we have really good schools, but something seems to be changing or at least at our middle school. What’s happening at HArvest Park? My 6th grader said shes scared to play on the blacktop b/c there was a huge fight last week. When I asked where the adults were, she said that there aren’t many grownups around and that there was also another fight the day before.

My older children went to the school when Mr. Hansen and Mr. Rocha were there and this would NOT be tolerated. With all of the different administrators over the last few years there were never problems like this. What is Ms. Brenner doing? This isn’t the HPMS of the past...

Like this comment
Posted by paul
a resident of Harvest Park Middle School
on Feb 15, 2020 at 1:46 pm

hp principle jst sent a email these fights r a big prob! There were fights lst yr too. Things dnt seem to b getting better But worse. Now kds r filming

The Impact of COVID-19 on Our High School Juniors and Seniors
By Elizabeth LaScala | 0 comments | 2,132 views

The first few seconds after awakening; before I remember the virus
By Chandrama Anderson | 0 comments | 1,035 views