Pleasanton Preps: Up and down week for local soccer teams | News | PleasantonWeekly.com |

Pleasanton Preps: Up and down week for local soccer teams 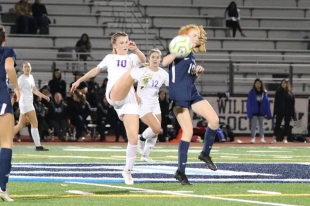 Amador Valley's Maddie Benson fights for the ball during the Dons' 4-1 win against Dougherty Valley. (Photo by Olivia Soble)

The Foothill varsity boys soccer team came away from last week with a loss and a tie against two difficult East Bay Athletic League opponents.

On Jan. 28, the boys took on first-place San Ramon Valley. The Wolves took an early lead, but Foothill tied it up with 20 minutes left on a Michael Kachkouche penalty kick.

The tie would not last long as SRV would score on a penalty kick and own goal to pull out a 3-1 victory. Foothill's Adam Harbourne had an impressive 16 saves in the game.

Two days later, Foothill faced Livermore and jumped out to a 3-0 lead on goals by Pablo Gill (2) and Kackouche. But there was no quit in Livermore, who would rally back and pull out a 3-3 draw.

Foothill's junior varsity boys had a very hard time generating any offense against San Ramon Valley and could only hold on for so long, losing 2-0.

The boys would bounce back Jan. 30 against Livermore for an exciting victory. Ben Harbourne scored a beautiful winning goal late in the game to pull out a 3-2 win. Ricky Carazos and Anthony Bonev scored the other goals for the Falcons.

In their game on Jan. 28, the Dons prevailed 4-1 on the road against Dougherty Valley. Amador came out cold, not scoring in the first half, but caught fire in the second half with goals from Emily Gossett, Bella Mayo, Kate Reedy and Noelle Marceno. Julia Gonsman contributed an assist.

Back at home two days later, the Dons took on Carondelet and suffered a tough 2-1 defeat.

After a goal by Marceno in the first half, the Dons maintained a 1-0 lead through 75 minutes. But the Cougars scored two goals in the closing five minutes, the winner just five seconds before the horn sounded. Freshman goalkeeper Elizabeth Fineberg made remarkable saves throughout the contest.

Livermore Fusion Soccer Club is accepting registrations for spring 5-versus-5 soccer. The program is open to Recreational and Select players born 2008 through 2013.

The season runs from mid-March through the first week of May. Each team will participate in six practice sessions and play six matches. The Fusion's Premier coaching staff will be the instructors.

Early bird rates are available through Feb. 16. Register at fusionsc.org.

The Impact of COVID-19 on Our High School Juniors and Seniors
By Elizabeth LaScala | 0 comments | 2,865 views

The first few seconds after awakening; before I remember the virus
By Chandrama Anderson | 0 comments | 2,427 views