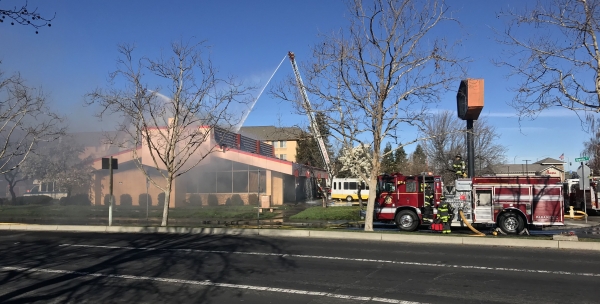 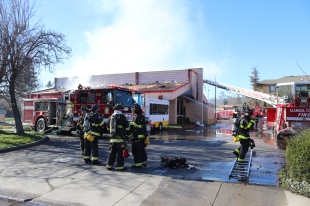 According to fire officials, the building -- which has been vacant since 2015 -- is believed to have been vacant at the time of the fire. (Photo by Ryan J. Degan)

The long-vacant restaurant building once home to Denny's on Owens Drive in Pleasanton is believed to be a total loss after a fire broke out and consumed the building's interior on Tuesday morning.

Responding to the fire at approximately 9:23 a.m. at 6455 Owens Drive, Livermore-Pleasanton Fire Department officials -- who were supported by Alameda County Fire Department personnel -- say the cause of the blaze remains unknown. Thus far, fire officials have not received any reports of injured civilians or firefighters.

"We don't know of any injuries (but) we were able to speak with the building owner and he believes that the building was unoccupied this morning. On our arrival, it was well-involved in fire so we initiated what we call a defensive fire attack so we fought the fire from the outside," deputy chief Joe Testa told the Weekly at the scene.

According to Testa, after arriving on the scene LPFD personnel began fighting the flames from the interior of the building but were forced out as the blaze intensified and spread.

Using water from hoses and ladders, firefighters were able to bring the fire under control at about 10 a.m.

Testa added that at some point structural engineers will examine the building -- which has been unoccupied since 2015 -- and work with investigators to determine the cause of the fire and examine the structural integrity of the building.

"My guess at this point would be that the building is going to be a total loss," Testa said. "It was fully involved in fire; even at our arrival the fire reached up through the ceiling. The owner reports that there weren't a whole lot of contents inside and the building wasn't being actively used, but I don't expect the structure of the building will survive this much fire."

The building was due to be torn down soon under plans to bring a small shopping center to the site. The Pleasanton City Council had just confirmed approval of the redevelopment proposal during its Jan. 21 meeting.

Building owner Abbas Mash had planned to construct a single rectangular building at 10,980 square feet with five commercial tenant suites on the site, with one intended to be a restaurant and the others some form of retail or commercial business.

"Sorry to hear about the fire, Marty."

"Shh! The fire isn't until Monday!"

Musta called the same arson who "accidentally" burned the Chabad on hopyard.

Report Objectionable Content
Email Town Square Moderator
7 people like this
Posted by Silverfox
a resident of Castlewood
on Feb 5, 2020 at 7:16 pm

I wonder how many people were pissed that they couldn't get to the drive up window at Chik fila??? :P

The Impact of COVID-19 on Our High School Juniors and Seniors
By Elizabeth LaScala | 0 comments | 2,132 views

The first few seconds after awakening; before I remember the virus
By Chandrama Anderson | 0 comments | 1,035 views