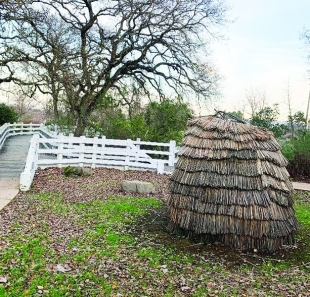 A family event will give everyone a glimpse into history and a chance to learn more about the first people of the East Bay in a "Native Ways Celebration" from 11 a.m. to 12:30 p.m. next Saturday (Feb. 8) at Alviso Adobe Community Park in Pleasanton.

The city's Environmental Education Division will present a newly completed Tule replica home on site from the Ohlone culture, including short talks about how the home was built.

The event is free, and no registration is required.

Alviso Adobe Community Park, located at 3465 Old Foothill Road, is an interpretative park that tells three aspects of the history of the site: its Native American beginnings; the days of Spanish Ranchos when cattle grazed on the original 12,000-acre Rancho Santa Rita; and the early to mid-20th century when it was a popular dairy.

Year-round visitors can see live animal displays in the re-created Milking Barn Museum and the re-created living space of the dairy workers. Also the original adobe, built in 1854, is still on the site and shows what life was like during the Spanish-Mexican Rancho Era.

The park offers hands-on activities including a chance to milk the fiberglass milking cow, Fiona, and wooden cows that can be lassoed. The site also has naturalist programs, historic and self-guided tours.

The Impact of COVID-19 on Our High School Juniors and Seniors
By Elizabeth LaScala | 0 comments | 2,868 views

The first few seconds after awakening; before I remember the virus
By Chandrama Anderson | 0 comments | 2,434 views