Amador Valley Wind Ensemble I blows away crowds in Chicago

Invitational Midwest Clinic is 'the largest music conference of its kind' 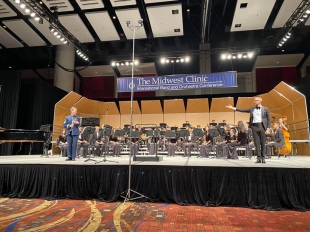 Members of Amador Valley High’s Wind Ensemble I braved freezing winds and rain to put on a performance at the Midwest Clinic International Band, Orchestra and Music Conference in Chicago just before Christmas.

The Dec. 20 lineup featured 20 bands total from the middle and high school levels, including Amador, as well as university and military groups.

The Midwest Clinic is “the largest music conference of its kind,” according to organizers, and gives performers “a chance to exhibit their talents to a supportive and enthusiastic audience with an interest in furthering music education.

The conference began in 1946 as a six-hour convergence of more than 100 music directors inside a Chicago gym, evolving into an annual four-day event with an assortment of clinics, rehearsal labs, concerts, and networking opportunities that now attracts more than 18,000 attendees from around the world.

Amador music educators Paul Perrazzo, Patrick Dandrea and Jonathan Grantham accompanied the students on the trip, and led them through their performances pieces along with a professional accompanist. “Celebrations” by John Zdechlik, “The Ash Grove” by Julie Girouz, and “Pineapple Poll” by Arthur Sullivan were among the repertoire.

“I want to congratulate the students and staff of the Amador Valley Music Department on their well deserved invitation to perform at the Midwest Clinic in Chicago,” said Pleasanton Unified School District Superintendent David Haglund in a statement. “This incredible honor is a testament to the hard work and achievements of our students as individual musicians, as an ensemble, and the current generation that is building on the legacy of the Amador Valley High School Music Department - one of the most remarkable and decorated music programs in the State of California.”

The Impact of COVID-19 on Our High School Juniors and Seniors
By Elizabeth LaScala | 0 comments | 2,895 views

The first few seconds after awakening; before I remember the virus
By Chandrama Anderson | 0 comments | 2,485 views