New manufacturing technology will be developed at $10 million facility 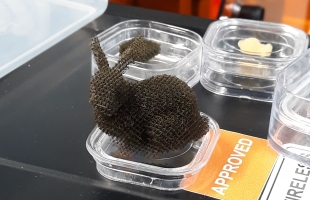 Located next door to the weapons lab, the 14,000-square-foot Advanced Manufacturing Laboratory (AML) holds cutting-edge technology inside its walls like next-generation 3D printers that create solid objects inside vials of liquid resin, and attempt to convert greenhouse gases into viable fuels.

The AML's opening was commemorated at a Jan. 23 dedication ceremony, where U.S. Rep. Eric Swalwell and other public officials gave opening remarks before a guided media tour of the site.

Eight industry partners, including General Electric and Aerotech, Inc. are currently hosted at the site, which contains two 5,000-square-foot labs bisected by a viewing corridor -- a wet lab for new process development, 3D printing, materials research and chemical work, and an instrument lab with industrial-sized manufacturing machines and nanomanufacturing capabilities.

There is also a conference room and shared work areas to encourage collaboration.

With access to uncommon materials, lasers and optics, advanced and additive manufacturing equipment, and high-performance computing and simulation capabilities, LLNL officials said in a statement that the facility will "merge LLNL's science and engineering expertise with academia and industry, creating public-private partnerships that address manufacturing challenges" by accelerating production and reducing production costs and time.

The AML is dedicated to developing technology that can be manufactured on a massive industry scale, like the trusses supporting the Bay Bridge. During the tour, researcher Bryan Moran showed off several tiny bunnies made of octet trusses that were created with an advanced 3D printer.

The minuscule scale of the trusses betray their true strength, and are very strong for their small size, Moran said.

"It's all done at once so it's stronger," according to Moran, who added that it took about six hours to print one of the bunnies, which measured no more than about an inch tall and less than an inch wide. The advanced printing process allows materials to be strength-tested by creating a miniature replica without the cost of building a full-sized model, significantly cutting costs for businesses.

Another project at the lab aims to harness harmful greenhouse gases and "convert what is a deleterious, harmful waste product into something of value" using bioreactors that are printed on-site.

"We're going to put engineered bacteria, microbes that were invented by the National Renewable Energy Laboratory in Colorado, and these bugs are very special," research engineer Eric Duoss said. "They eat methane and then they convert that, they spit out methanol, and methanol is a valuable resource" that can be used as fuel.

"The idea here is we're going to in the future take cheap and readily abundant electrons from renewable energy sources and we're going to feed these into these kinds of cells, and it'll react and be converted into these valuable products," Duoss said. "This is about helping our country's security when it comes to climate security, energy security, resource security and economic security. It's looking into a future when oil and gas sources won't be as readily abundant."

The Impact of COVID-19 on Our High School Juniors and Seniors
By Elizabeth LaScala | 0 comments | 2,134 views

The first few seconds after awakening; before I remember the virus
By Chandrama Anderson | 0 comments | 1,042 views