Decreased parking and more commercial space among the alterations 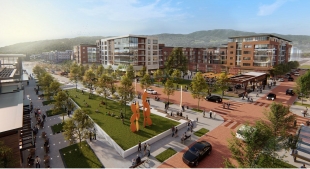 Dublin is just trying to compete with the City Center at San Ramon and will just end up wasting a TON of money (don't forget, Dublin is the stack n' pack capital of the bay area now too and the more they can cram in town, the better).

Very poor planning in Dublin - only ONE road runs through town (Dublin Blvd). The least they can do is synchronize the traffic lights. No, they can't even manage that! It's so stupid to sit at one red light, but the next traffic light up ahead is green. Then by the time you get to the next light, it turns red! In this modern age, all traffic lights on major roads should be synchronized!!

Melinda is a registered user.


Every City needs a downtown for community identity. The reduced parking ratio for residential will not work. It’s a dream that people will take mass transit, carpool and/or walk Without having a car at home still. Hopefully unassigned resident and guest parking are considered and loading and/or the ever present FedEx, UPS, Amazon, etc staging is designed. New Residential satellite cities built in 1970s Europe taught that too much density and multi-level buildings In one place creates lack of community feeling.

I recently read that Dublin wants to ban natural gas use in all new housing.

Along with what is mentioned in this article, another good reason people will only live in Dublin if they have no other choices.

While I feel sorry for the poor saps that buy these homes without natural gas - impacted even more by PG&E power outages - it makes me happy because my home in Pleasanton will increase in value at an even greater amount.