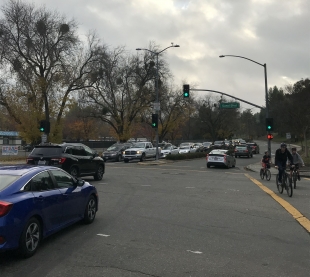 City officials are reviewing options for the project to add a second left-turn lane from westbound Bernal (shown facing camera), a high-priority traffic-calming project for the city. The project will likely involve acquiring right-of-way from PUSD. (Photo by Jeremy Walsh)

Like this comment
Posted by Fifty Years Here
a resident of Pleasanton Heights
on Dec 12, 2019 at 8:49 am


I want to go back to that corner and have just one more burger from the BJ Corral!!!

ddclausen is a registered user.


I remember BJ Corral. Remember when Bernal was Pico and it ended at the entrance to Olde Towne. It was a much different city in the early 80’s.

Report Objectionable Content
Email Town Square Moderator
4 people like this
Posted by Get the Facts
a resident of Another Pleasanton neighborhood
on Dec 12, 2019 at 10:40 am

Get the Facts is a registered user.


I drive that way every day, and I don't see that left turn being a problem. Maybe it's the time I go (between 7:00 and 7:45), but the signal changes enough that I've never seen left-turn cars get backed up beyond the left-turn lane. It doesn't seem like it needs fixing.

Report Objectionable Content
Email Town Square Moderator
1 person likes this
Posted by Kathleen Ruegsegger
a resident of Vintage Hills
on Dec 12, 2019 at 11:01 am


“ Staff at all 15 PUSD schools will be asked for input as part of what Superintendent David Haglund called a "school-by-school design process" to help determine which devices are best suited for the different sites.” These are audio visual devices they wish to pilot. While school-by-school can address different needs of each school’s population, I hope quality and quantity equity will be a priority at each grade level—no one school/grade should have BMWs while another gets Yugos.

Report Objectionable Content
Email Town Square Moderator
3 people like this
Posted by I love a parade
a resident of Vintage Hills
on Dec 12, 2019 at 11:03 am

I love a parade is a registered user.


The facts are that during commute time, it may easily take 3 light changes to get to turn left. Hard to believe for those of us used to traveling off-commute hours, but I got stuck in it one morning after 7:30. In addition to commute traffic, parents getting their youngsters to school exacerbate the congestion, and it genuinely, factually is a problem. Remember there is PMS to the west of the intersection with parents from Vintage Hills, Ruby Hill, Grey Eagle and other eastern residential areas with students going to Vintage Hills or Valley View elementary and perhaps another headed for PMS. Perhaps even one for Amador or Foothill High School. That's a lot of traffic for an intersection with only 1 left turn lane to add those heading to 680 for their own lengthy commute. Yup. It needs fixing.


Inevitable...small town becomes a small city and then small city becomes a medium size city. I don't follow traffic trends so I don't really know, but in my opinion a lot of our traffic is caused by parents getting the kids to school (not that they should be blamed). When there are traffic problems the officials in charge usually tout "public transportation" to help ease the congestion. Would bringing back school busses help? I don't know, but I think Kathleen R. might. I'm sure it couldn't hurt in the a.m. commute.

Report Objectionable Content
Email Town Square Moderator
3 people like this
Posted by Kathleen Ruegsegger
a resident of Vintage Hills
on Dec 12, 2019 at 5:35 pm


One big problem is over 200 elementary students who are not able to attend their neighborhood schools, forcing parents to drive elsewhere in town to get their child to school. Second, in my opinion, is a lack of safe cycling routes (although I know there is a group pushing the city on that topic). There was also the Amador mess earlier in the school year while the solar project caused the temporary loss of 400 parking spots.

I would hope any change in this intersection would include lanes for cyclists.

Busing is not coming back (I was on the board in the early 90s when it was decided to cut them). There was an attempt to have parents pay for the service, but many families couldn’t or wouldn’t pay. Very awkward for drivers—do you leave a child standing at the curb and drive away?

Buses are now over $100K; there would have to be fuel, parking, maintenance, mechanics, drivers, benefits, pensions, all adding to costs there is no money for (increasing pension contributions on the district side are fairly crippling). My understanding is we don’t even have sufficient custodial staff (always seems their jobs and hours are the first cuts). Anyone else feel Amador, or any other school for that matter, is not being properly maintained?

Report Objectionable Content
Email Town Square Moderator
3 people like this
Posted by Map
a resident of Del Prado
on Jan 7, 2020 at 8:35 am

Easy fix. Just build a “flyover” from westbound Bernal to southbound Sunol thus encouraging even more cut-thru commuters to blow thru our city streets twice a day, seems like everything is about making it easier for cut-thru traffic!! Once the city planners get their way and build out East pleasanton with stack and packs they better plan on making Valley Ave a double decker freeway or find some other way to get into town from Livermore and beyond.

How can a school district such as Los Banos in the Central Valley afford school bussing but Pleasanton Unified can't?

I only know this because my niece is a school bus driver for LBUSD.

Anyone lurking from the school district want to chime in?


Here’s a link to Los Banos: Web Link The one elementary schedule I looked at starts at 6:25 a.m. (elementary!), and if I read it right, you have to live more than 3 miles away to qualify for an elementary bus. Not exactly busing for all.

All districts, as far as I know, provide transportation for special needs students, as does PUSD. PUSD tried to support busing with a fee, but what does a driver do when a parent doesn’t pay (and many didn’t)? You can’t leave a student on a corner. There’s a longer version, but the district cut $1MM a year for at least the three years I was on the board—out of a then $40MM budget, and busing took one of those hits.

Buses cost more than $100,000 the last I looked; then you need drivers and their benefit impacts and vehicle insurance and fuel and maintenance—not a cheap thing to reinstitute. Plus, the district and city worked with Wheels to provide routes that serve most, if not all, areas. You need families to want their children on those buses. Not likely at the elementary level.

Even “wealthy” districts are selective about providing transportation. Here is a report (2014) from LAO: Web Link

Pleasanton is a wealthy community

Sure - I think it's true "New Pleasanton" is wealthy.

The rest of us who have lived here for a longer period of time are not so wealthy (note our home equity doesn't really exist until we sell the property, unless we take out loans we can't really afford).

Id all the new, rich Silicon Valley workers want to pay for buses, please go ahead. Just don't charge me for them.

You Can Help: Scents and Migraines
By Chandrama Anderson | 0 comments | 719 views