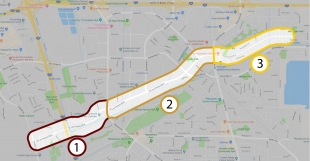 Map shows the length of West Las Positas Boulevard bikeway project, which will likely be divided into these three segments for prioritization for construction. (Image courtesy of city of Pleasanton)

Do we really believe bike lanes will change behavior in kids who ride WLP today in the wrong direction? They scream down the hill from the 680 overpass straight into oncoming E bound traffic. By Hart they ride the north side of the street no matter if they are going E or W. Maybe enforcement first?

LosPo needs a whole redue. It's 3rd world quality road with dips and bumps all over the place. I avoid it when I can.


I took the survey and most of the options looked good. I can only hope that when they start construction they fix ALL of WLP. It's a road that most locals avoid even though it involves more miles and time...just not worth it to risk busting and axle and yes, it is that bad. I'm sure that the tree roots along that street have a lot to do with the poor condition of the roadbed. Or maybe they can blame PG&E for not maintaining its underground lines ;>)

1 person likes this
Posted by Arroyo2
a resident of Another Pleasanton neighborhood
on Nov 12, 2019 at 11:19 am

Slightly off the topic -- I want to remind parents that their young children who ride at night on dark colored bikes, wearing dark clothing, and without front and rear lights run a terrible risk of being hit by a car. I know because now that it's dark earlier, I almost hit two of them in the past week.

And, the new set of front and rear LED lights for their bikes that you've just presented to them is because you love them and want them to return home safely.

Report Objectionable Content
Email Town Square Moderator
3 people like this
Posted by John
a resident of Valley Trails
on Nov 14, 2019 at 10:36 am

All of these so-called "improvements" will be disastrous. Take a close look at each of the options, they all call for the elimination of one lane - from three to two. They cleverly place cars on the illustration to make it appear that it is a drive lane, when in fact it is parking. Note the "P" below the far/curb lane.

This "road diet" has no place in our town. This is going to create bottlenecks and increase the chance of accidents. If they want to create this utopian walk/bike scenario, then crate it from the property that runs along WLP. There are already sidewalks and bike lanes along that route. No accidents or issues that I know of. Leave it alone!!

Report Objectionable Content
Email Town Square Moderator
2 people like this
Posted by Pleasanton Parent
a resident of Pleasanton Meadows
on Nov 14, 2019 at 9:31 pm


John you are very correct, the images are very misleading, especially 1a and 4 where the difference is the elimination of one lane going west altogether.

I also love how cost is pretty much completely avoided. If money is no object why not propose a gold plated road?

What’s the available budget for this? Give me the options that fit the budget.

These improvements are welcome. This is designed to increase the safety and comfort of all users along the route. The bike lanes, where they exist at all, are unprotected and very uncomfortable for the traffic speed that exists.

"increase the chance of accidents"
No, it will not.

"No accidents or issues that I know of."
I refer you to page 41 of the Pleasanton Bike Master Plan.