Construction expected to begin in spring; reopening by December 2020

Developers’ rendering shows concept for reconfiguring the 7-Eleven and Shell site at Hopyard and West Las Positas. (Image courtesy of city of Pleasanton) 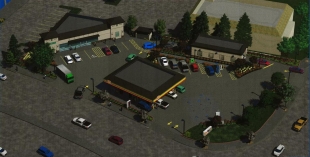 An aerial look down at the proposed redesign of the 7-Eleven/Shell site, which includes new buildings, adding a car wash and merging the two lots. (Image courtesy of city of Pleasanton)

The Pleasanton City Council has unanimously endorsed a property owner's plan to tear down and replace the 7-Eleven store and Shell service station on Hopyard Road with a brand-new 7-Eleven, gas station and drive-thru car wash.

Council members and city staff said they saw the redevelopment proposal as improving awkward layout of the property, offering needed design upgrades and addressing concerns from a neighboring church during their hour-long hearing on Oct. 15 that also focused on issues such as alcohol sales, safety at the adjacent intersection and how prominent the Shell brand colors should be.

"Quite frankly, this corner looks tired ... the landscaping has been let go. And so I look at this project as a huge improvement at a major intersection in our city," Councilwoman Kathy Narum said.

"This project is also going to provide some land that's going to allow us to have a bicycle lane on that side of West Las Positas," Narum added. "And I think we also have an opportunity here to eliminate some problems that the church has been experiencing."

The two adjoining lots, which total 0.91 acres, would then be combined into a single, reconfigured parcel with a new 7-Eleven store, drive-thru car wash and a new Shell gas station canopy with four additional pumps.

The proposal calls for the convenience store to be open 24 hours a day and the ability to sell some alcohol (from 6 a.m. to 2 a.m.) -- it would become the sixth gas station store in Pleasanton to sell beer and wine, according to city staff. The car wash would operate from 7 a.m. to 10 p.m. daily.

The new operations would require the site to be rezoned from neighborhood commercial to planned unit development (PUD)-commercial.

"This is a tremendous improvement -- aesthetically and marketing -- to the neighborhood. Most importantly, this is an improvement for the customers," Hirst told the council. "This is a win-win-win for everybody."

Among the site improvements proposed is removing the current driving aisle between the 7-Eleven site and the neighboring Church in Pleasanton parcel. Church representatives had raised concerns to city officials about loitering, 7-Eleven patron parking and delivery trucks in the church lot.

City staff said they think the proposals to remove the shared driving lane, along with adding a new fence between the properties and a dedicated delivery zone onsite, will alleviate those problems.

About 75 church parishioners were in the audience for the council hearing, but only Daniel Chen spoke on behalf of the church, saying they were in favor of the final redesign plan as recommended by city staff.

"Originally we were opposing the project because of being a neighbor of 7-Eleven for the past 10 years, we've encountered numerous problems," Chen said. "But then, I really appreciate the decision tonight by having two perimeter fences, on the west side and also the southern side."

Steve Van Dorn, president and CEO of the Pleasanton Chamber of Commerce, was the only other public speaker, saying he and the chamber support the project.

As the debate returned to the dais, Councilwoman Julie Testa said she did not like the redesigned fuel canopy proposed to include the bright yellow and red Shell-brand colors painted all around the overhang, especially since the current canopy is more muted.

"I think you set a new standard (tonight) where we start saying gas stations should blend in instead of standing out," Testa said, advocating for the bright color bands to be significantly toned down or removed entirely.

Hirst returned to the lectern, saying the council disallowing the colors would likely be a deal-breaker.

"Anabi Oil has a $500 million a year supply agreement with Shell Oil. Those colors and the sign are part of the supply agreement," Hirst said. "If what we have proposed is not acceptable for the city of Pleasanton, then (the property) is going to stay the way it is."

Narum pointed out that other gas stations in town, including the other Shell stations, have canopies branded with color banding.

The council ultimately decided to include an amendment asking staff to work with the applicant to try to tone down the canopy colors, but not require any changes be made.

The vote was 5-0 to support the project and introduce an ordinance to approve the rezoning, PUD plan and conditional use permit. The second reading and final adoption is expected to occur next Tuesday.

Hirst said construction is expected to begin by March or April, after obtaining necessary permits. The businesses will close while work is being done, and they hope to reopen by December 2020.

The council also asked city staff for an update on the timeline for the city's planned street improvements at the Hopyard-West Las Positas intersection, which could include adding bike lanes and removing the free-right-turn or "slip" lanes.

With the city project current in pre-design phase, the council is expected to decide on a conceptual design in the spring with final design and other work to follow before construction can begin no sooner than 18 months from now, City Manager Nelson Fialho said.

Mike Woody is a registered user.


Too bad. The old shell station doesn't get much business today primarily due to pricing. I live around the corner and i never buy gas there. Neither do any neighbors i know. Its too bad our city council only judges the pictures and site map of project and then jumps in with both feet. I wish before i vote i could ascertain the intelligence before i select. If they really had their hands on the pulse, they would realize most are waiting for Costco gas, not another overpriced Shell.


Like the city council would dare do anything to upset Shell oil and MS and his band of paid for petitioners. Thanks to JT for bringing up that gaudy, bright yellow and red canopy, we see what’s important with the city council!! We don’t need another car wash let alone liquor sales on that prime corner. Who in this town keeps buying that overpriced gas??


Oh goody...a new venue for overpriced gas and an overpriced 7-11 (that attracts all the late night druggies) while we wait for the Costco to be built. What is wrong with you people on the planning commission and the city council???

Repairing a Disagreement with your Beloved & “Physical” vs. “Social” Distancing
By Chandrama Anderson | 0 comments | 903 views