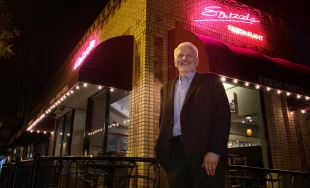 Ray Bartolomucci Jr. outside of his Strizzi's restaurant in downtown Pleasanton. (Contributed photo)

One of Pleasanton's home-grown restaurants is celebrating a milestone 30-year anniversary this month.

Strizzi's has anchored the corner of Main and St. Mary streets since 1989. It was owner Ray Bartolomucci Jr.'s second Strizzi's location, but he was bringing it to his hometown of Pleasanton. He's lived in Pleasanton Valley since before opening the restaurant. He and his wife have raised their four children here.

He and his team are throwing 30th anniversary celebrations at all locations: Strizzi's in Livermore (opened in 1996) and Fremont (opened in 2006) with special menus, special pricing on desserts such as their famous sour-dough bread pudding, wine specials, dinner and brunch specials and $10 entrees to go.

Opening the Pleasanton site required some extra political exertion. The police chief at the time, Bill Eastman, had prioritized cleaning up Main Street and its bars and drinking on sidewalks. The City Council had passed an ordinance that made drinking alcohol in public a violation, even on private property such as drinking a beer with a neighbor on your front lawn. (To my knowledge, it was never enforced at this level, but it was on the books.)

Ray believed that outdoor dining with wine was critical to the success of his new restaurant, and he went to bat for it. The compromise was putting up the fences on the sidewalk to enclose the tables and paying the city rent for the use of its sidewalks. When the council approved that, it launched the dining scene you see downtown today, where it is the rare restaurant that does not offer al fresco dining.

It all started with Ray and Strizzi's.

His family approach carries over to the menu and wine list. There's no corkage charge because he and his wife don't like them so Strizzi's doesn't have one. Because the customer experience is paramount, substitutions to menu items are welcome.

Ray melds his background in corporate and chain restaurant management with strong family values in his restaurant company. They operate three Strizzi's restaurants (the original in San Leandro opened in 1986 and closed in 2005), plus Rigatoni's in Dublin, Castro Valley, Hayward and the Red Smoke Grill in Hacienda Business Park in Pleasanton.

The family values shine through in several ways -- the restaurants are named for his grandfather, Luciano Strizzi and there's still a mixture of family recipes on the menu. More significantly is the longevity of his team members.

Kelly Morris has served 25 years in Pleasanton, while manager Chris Martinez has been there 20 years. Kelly's daughter Emily Wearne, a mother of four, is in her 17th year as is Justine Sieber. Kitchen manager Andres Hernandez has worked preparing food for 21 years. Those are impressive years of service in any industry, let alone the restaurant business where it's easy for people to move.

The restaurant has many regulars who call for reservations and request both a specific table and a specific server.

As the demographics shift rapidly in Pleasanton with many more Asian and Indian families moving in, I asked Ray how he was adjusting. In Fremont, where the ethnic mix already has shifted, he's added a shrimp tossed with spicy Thai curry sauce that would not normally be found in an Italian restaurant but has been selling well. Don't be surprised to see it in Pleasanton and Livermore.

We dined there on a Tuesday night that was busy, with most tables filled and an Indian family birthday party filling up a table for eight. One pleasant surprise was seeing Don and Ann Rathjen and Judy Del Tredici. Judy's late husband, Rich, taught me freshman English at Amador Valley High School in Pleasanton more years ago than any of us want to remember, while Don, also a first-year teacher back then, established the excellent physics program at both Pleasanton high schools.

We frequented Strizzi’s in San Leandro, we always enjoyed the Italian fare. One evening we met Ray, he mentioned that he was interested in finding a location in Pleasanton. I introduced him to the property owner of the building Strizzi’s still occupies Downtown Pleasanton. I later met Rays’s family.
Congratulations to you celebrating 30 years iDowntown.

Congratulations Ray. It was a pleasure to be just down the street for the 26 years we operated the Pleasanton Hotel Restaurant and Lounge.
You are a professional and I've always been impressed with the quality of your operations.

May your future years be as successfully, especially considering all the roadblocks California places on restaurants.

Report Objectionable Content
Email Town Square Moderator
10 people like this
Posted by David Bartolomucci
a resident of Downtown
on Oct 18, 2019 at 10:09 pm

The first few seconds after awakening; before I remember the virus
By Chandrama Anderson | 0 comments | 3,368 views