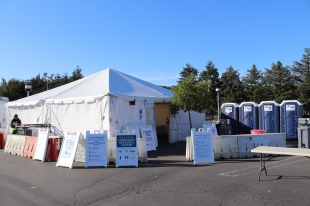 Community resource centers will be open during the shutoffs for Alameda County residents at Merritt College Lot B on Leona Street in Oakland. Contra Costa County residents can visit the Bishop Ranch Parking Lot in San Ramon at 2600 Camino Ramon. (Photo by Ryan J. Degan)

This was the whole purpose of the smart meters. So they can shut you down at will. Welcome to 3rd world

California wants us to replace all of our gasoline cars with electric cars. But wait, PG&E turned off the electricity! Hopefully the fire trucks are still allowed to use gasoline.

the whole event was a big nothing. high winds? nope. not even in Petaluma, Napa etc according to friends in those areas. PGE officials and their policies need to go. a single power provider is not good for the consumer, far too much power (no pun intended) that is not kept in check - the PUC is a joke, a bunch of unelected bureaucrats all in each others pockets. Feel
like Venezuela yet?

No doubt PG&E has worked with the Newsom administration, and the deal is "oh no, you can't go bankrupt yet and drop your failing company on the state" (stock drops from $11 to $7.50) in hours after shutdowns. We have to make the people understand why the state HAS TO take you over. Let's try some of this to demonstrate. Big scam brewing. Electric off at my house, max wind for 2 days...21 mph!! Did not even blow leaves around. Another weight on the scale to flee this socialist empire...state is lost.

Report Objectionable Content
Email Town Square Moderator
4 people like this
Posted by Naveed Khan
a resident of Stoneridge Park
on Oct 11, 2019 at 11:24 am

Dear Sir,
PG&E has proven beyond a doubt that they are incapable to manage power grid, ensure uninterrupted supply and provide safety to public. Our political leadership should take a decisive action and "Nationalize" PG&E. It should be run as a Non-Profit utility company, because it is a Monopoly. The State should run it and at the same time through legislation it should be non-unionized. In most of the world utilities are run by the government as a non-profit companies. We gave PG&E many many years, highest power rate in the country to fix the problems. PG&E is incompetent and tries to deceive public and manipulate PUC.

Report Objectionable Content
Email Town Square Moderator
2 people like this
Posted by Ron R.
a resident of Vineyard Avenue
on Oct 11, 2019 at 7:03 pm

Taking some of above comments a step further, PG&E needs to be forced to divest into two or more separate companies by the state. This was done to AT&T, by the federal government in 1982, to break up the monopoly it had. The governor, our state legislators, and the CPUC can make this happen. In the meantime, you may want to file a complaint with the CPUC for PG&E's incompetence, etc., for this latest debacle, and ask for the resignation of William D. Johnson, CEO and President of PG&E.