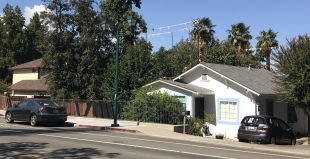 This small house is due to be torn down and replaced with a trio of two-story homes on the deep, narrow parcel -- story pole with flags above property show dimensions of the new houses. (Photo by Jeremy Walsh)

Steven 3 is a registered user.


Why would the majority on the Council sign a $400k contract with developer Miorganroth after Morgenroth just illegally demolished one of our few designated historic homes, and without permits? We need to send a message to developers that historic resources should be protected, not reward them for demolishing homes without permits.
I wonder if Morgenroth or his relatives donated to Councilmenber Narum, Pentin, or Thorne’s past campaigns?


The city renews its deal with the general contractor involved in the demolition of a historic home? Why? There were no other qualified contractors interested in a one-year deal with the city valued at up to 400K? I can't fathom why this occurred.

Agreed, I totally question Morgenroth and less than appropriate actions.

Report Objectionable Content
Email Town Square Moderator
4 people like this
Posted by Karl Aitken
a resident of Pleasanton Valley
on Oct 10, 2019 at 2:13 pm

Looks like a good project. They had the 3D outlines of the structures set up so you could see what it looks like. Fits right in with the other multi-story homes next to it. Good Job City of Pleasanton.