New amenities aim to ensure all kids can enjoy the park 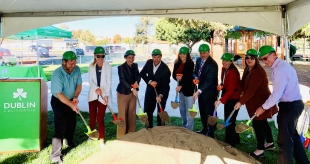 With shovels in hand, local leaders turn the ceremonial dirt during groundbreaking event Oct. 1. (Photo courtesy of city of Dublin)