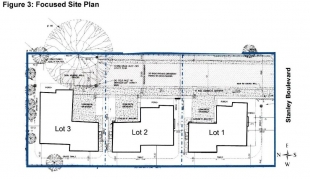 Site plan showing how property would be subdivided for new houses. (Image courtesy of city of Pleasanton)