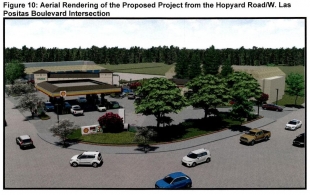 
Good thing it was already a Shell gas station...if it was a Costco gas station it would have never made it without a vote.

A good project like a Pleasanton Costco! Must go out of town to Costco for the best gas prices! Why the delay?

Report Objectionable Content
Email Town Square Moderator
Like this comment
Posted by A Same to lose the Smog shop
a resident of Another Pleasanton neighborhood
on Sep 12, 2019 at 9:37 am

They do good work,
and at a good price.

Smog requirements were supposed to end when the car was 25, but they changed the rules.
Mine always has passed, so this is just another government added cost.
Maybe they could allow those who passed a couple of times in a row to be exemp?.

Report Objectionable Content
Email Town Square Moderator
2 people like this
Posted by judy
a resident of Pleasanton Valley
on Sep 12, 2019 at 9:55 am

Taking out a perfectly good home to replace it with three two story homes on an already busy street isn't a good idea. The street has become to busy already.

Report Objectionable Content
Email Town Square Moderator
4 people like this
Posted by Doug
a resident of Parkside
on Sep 12, 2019 at 10:52 am

How will the intersection be redesigned to accomadate all the extra traffic entering the Shell/7-11 property and then onto Hopyard from the site? It is already a dangerous merge. There are two car washes at Hopyard near 580. Is that too far to drive?

Report Objectionable Content
Email Town Square Moderator
12 people like this
Posted by jaycee
a resident of Another Pleasanton neighborhood
on Sep 12, 2019 at 11:24 am

The existing 7-11 and that whole area could definitely use an update! The rendering looks nice.

Report Objectionable Content
Email Town Square Moderator
14 people like this
Posted by Mike S
a resident of Val Vista
on Sep 12, 2019 at 11:31 am

The combination of 7-11 and Shell is long overdue. That corner property has needed a redesign for years. That 7-11 is ageing and the parking lot is cramped. The Shell station has far too much property dedicated to parking and a tiny store. This merger will serve Pleasanton much better. Now the carwash will need to meet state recycled water guidelines I hope - that was left out of the article.
And the approval of the additional housing is a step in the correct direction. Pleasanton has long been afraid of residential growth and must change that. The state of California is 4 million homes behind demand and Pleasanton must do its part to increase housing supply. Too long has Pleasanton limited growth and that limit is negatively impacting everyone - higher rents - higher property taxes and pushed out many of the people that work in Pleasanton but have to live elsewhere. Now the city needs to fast track the permitting of more high density housing projects and actually grow.

Another construction project neighboring Val Vista? The project at Johnson and Stoneridge has been going on for six months and the Costco construction will start soon I’ Sure. The dirt in the air is awful. We have to keep our windows closed 24/7. I believe the residents of Val Vista are getting no consideration regarding their suffering.

I agree with Doug. This is a very busy intersection. The added services at this location will increase the traffic and cause safety concerns for our kids going to Donlon and Hart Middle School. Are the schools aware of this proposal and has the community had the opportunity to give the planning committee any feedback?


Russell...you forgot about the the construction at the sewage treatment plant and the the soon to be started Donlon School expansion. And Mike, I disagree that we need more "high density housing projects"...that's just more traffic in an already overburdened area and more students with nowhere to put them.

I just bought gas at Costco for $3.27 and this Shell station had it for $3.77...that's a big difference. Who are they kidding, I haven't bought gas there since Costco opened their station. I don't know how many people will want to get their cars washed after paying that extra $10 to $20 a fill-up. But maybe the developers know something we don't...another carwash on Hopyard is just what we need to boost the local economy ;>)

Report Objectionable Content
Email Town Square Moderator
2 people like this
Posted by Map
a resident of Del Prado
on Sep 12, 2019 at 8:53 pm

Want to see Costco put on the fast track build — put a Shell gas station on the new Costco property! Who’s running this town, surely nothing being done in the best interests of the citizens, how many overpriced shell gas stations do we need in this town along with another car wash plus a larger 24 hour 7/11 selling alcohol!

Report Objectionable Content
Email Town Square Moderator
5 people like this
Posted by Mike Woody
a resident of Valley Trails
on Sep 13, 2019 at 5:00 pm

Mike Woody is a registered user.


I have lived in Valley Trails for 6 years. I haven’t bought gas at that Shell station in that time. I have to buy ice at that 7/11 several times a month for business. Half the time they are out. Further, the store looks tired and not well kept. They have a support petition for the upcoming proposed changes for customers to sign on the counter but i feel why give the operators more to manage when it looks like they have their hands full now. I also agree that more traffic on that corner when it's already a traffic issue is not well thought out. I buy my gas at costco and am patiently waiting for the pleasanton one to be built but i still wont buy gas at that Shell station.

Maybe with the Shell Station/7-11 revival they will change the configuration of that intersection and take out the southbound merge lane from W. Las to Hopyard and make it a normal corner. That would alleviate the near constant rear end and merging accidents from happening.