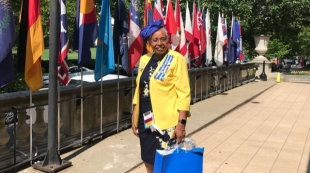 Cindi Newbold of the Pleasanton chapter of the Daughters of the American Revolution, shown outside the DAR Constitution Hall in Washington, D.C., attends its 128th Continental Congress. (Contributed photo)