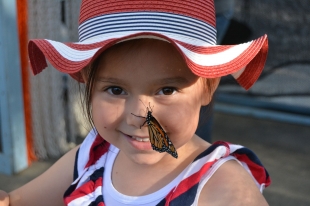 A butterfly lands on the nose of Riley Phan inside the butterfly exhibit at the Alameda County Fair on June 21. (Photo by Samantha Laurey)

Willy is a registered user.


The Alameda Fair is not what it once was :-( In addition, Pleasanton has to put up with garbage everywhere and some very unruly people.

One item I don't see posted is the revenue from parking, entrance fees and incidentals. With nearly a half million people attending I imagine the intake is substantial. After paying for all-in expenses, how much "county fair" money is considered "profit" and how is it dispersed?

The Fair provides opportunity for youngsters to have a place to see livestock that some would never know existed in 'real life'. See how plants are grown, art in all forms, live entertainment, wholesome fun, and experience all different walks of life in one tiny spot on earth....It is all good, unless some just cannot leave well enough alone. It's something that can be a great experience and builds never to be forgotten memories.

Report Objectionable Content
Email Town Square Moderator
2 people like this
Posted by HadFun
a resident of Highland Oaks
on Jul 22, 2019 at 7:40 am

We enjoyed the expanded area for toddlers and younger kids to small to ride the big rides.

Growing up here, I mark the years by the fair. Not birthdays, or new years. For me the fair is my time to reflect on another year while taking in the constants that I've seen since I was a kid. Other than the freak shows being gone, I don't think it has changed much at all. My mind can jump between 1985 and 2019 as I walk though, which can be emotionally disorienting.

There is some new, such as finding a new easter egg each year hidden in the model train layout. I love the collections. And I'm strangely fascinated by the artistry in the themed place settings competition. Seriously! Check it out next year.

The fair is a nonprofit organization. Nobody gets the profits other than the fair itself. You can see the salaries of the highest paid employees if you like. They're online.

It's really an amazing self-sustaining operation. I was able to hear the prior director of the fairgrounds speak about their business, and I was amazed. It's a very well run operation.

You Can Help: Scents and Migraines
By Chandrama Anderson | 0 comments | 2,282 views