Trivia in the Tri-Valley | News | PleasantonWeekly.com |

Trivia in the Tri-Valley 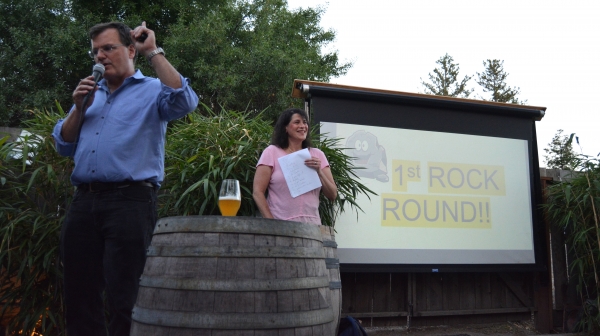 Jeff and Nancy Lewis host trivia night at McKay's Taphouse and Beer Garden in downtown Pleasanton, as they raise money to donate to the Valley Humane Society. (Photo by Samantha Laurey) 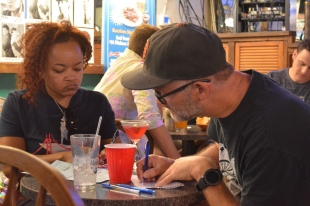 On a weekday night, many people are searching for something fun to do with their friends, colleagues, significant others or family.

Some opt for a movie, a group bike ride or a bite out for dinner, but others in the Tri-Valley try their hand -- and mind -- at a local trivia night.

"We were looking for something we could do and walked in to see that there was trivia going on, so we decided to try it out," Casara Ortie, who is new to the Tri-Valley area, said during trivia night at McKay's Taphouse in downtown Pleasanton last month.

Trivia group games at local bars offer many formats, but most are regular contests and leagues presented by companies like Brainstormer Pub Quiz or Stump Trivia, or smaller-scale endeavors organized by local trivia aficionados -- a way for people to test how much "useless knowledge" they have, in competitive or non-competitive environments.

One trivia spot in Pleasanton gaining popularity is the game at McKay's, which is held on the third Tuesday of the month at 8 p.m. at the bar and restaurant on Main Street in Pleasanton and doubles partially as a fun fundraiser for Valley Humane Society, a Pleasanton-based nonprofit devoted to saving and improving the lives of pets and their human companions.

Nancy Lewis, a Pleasanton resident and Valley Humane Society volunteer, recalled approaching bar owner Barbara McKay about a year ago with her idea to organize a regular trivia night to expand her volunteer support of the nonprofit -- plus take advantage of her trivia-laden mind.

Lewis, who is also a regular contributor to the Weekly, producing the Streetwise column with her daughter Jenny Lyness each week, remembered McKay was very excited for the chance to have a trivia night led by Lewis and to support a good foundation.

Growing from there, the trivia night has become a fun night out downtown while spending time with family and friends. Everyone is welcome to come sign up and play, whether you're a first time player or you've been attending for months, according to Lewis.

The teams are formed before the trivia starts, so there is time to pick out a name for the team and pick up an answer sheet.

Some teams are first-timers like "The Three Must Get Beers," Ortie's trio who were looking for something entertaining to do downtown and came across McKay's trivia night by chance on June 18.

Other teams like "Mommy Brains" have been playing at McKay's since the bar started having trivia nights.

"We wanted to find a fun way to get out of the house and have a girl's night," said Jessica Hergert, a "Mommy Brains" team member.

Lewis and her husband, Jeff, start off by explaining the trivia night to everyone that participates.

There are three rounds of multiple choice questions, where teams are given a minute to answer each one. From round one to three, the questions progressively get tougher. The questions come from several categories like music, science, pop culture and more.

After every round, there is a special rock round, where teams try to answer a question right or get closest to the answer to win a rock painted by Lewis. She makes rocks and bracelets that she sells throughout the trivia night and donates to Valley Humane Society.

When the night comes to a close and the points are all counted up and scored, the winning team is crowned and earns free drink vouchers that can be used at McKay's.

"It's great to show off your ridiculous trivia knowledge," Lewis said with a smile.

Another popular place for trivia nights is Sunshine Saloon, as the bar and restaurant hosts regular trivia contests every Tuesday night starting at 8 p.m.

Sunshine Saloon, located on Santa Rita Road near the Valley Avenue intersection, is currently holding a 13-week tournament for those who want to play trivia competitively while also inviting any first-timers or regular players to play alongside anytime during the tournament.

Before the trivia night starts, the hosts go around to all the tables, check to see who wants to play and then explain the rules.

There are four rounds with questions that teams can answer for a certain amount of points. The team that wins the trivia that night walks away with a $25 gift certificate.

"I have been hosting this trivia night for about a year, and it is a great way to stay busy." says John Pitman, Sunshine Saloon trivia host. Pitman and his fiancee, Megan Moore, met through trivia and have been hosting it together ever since then.

There are many teams at Sunshine's trivia that have been showing off their knowledge for some time now.

Members of "Mind the Gap," the winning team on June 25, said they have been spending most Tuesdays at Sunshine Saloon.

"I'm a trivia buff and love to come to play on Tuesday, and come (here) on Wednesdays for 'Family Feud,'" said Olivia Sanwong, a player on "Mind the Gap."

Sanwong, a Pleasanton resident and a local elected official on the Zone 7 Water Agency Board of Directors, is so committed to Tuesday trivia at Sunshine Saloon that she held her Election Night gathering at the bar in June 2018 so she wouldn't miss a game.

"Malice & the Crew," which has been playing together at Sunshine Saloon for about five years, consists of Monica Semooic, Jim Nelsn and Chuck Coutts, plus other players that were not present during the June 25 competition.

They agreed that they like how challenging the questions are, and the musical hints (referring to the song title or artist) that accompany them.

While another team, "The Neverland Rancheros," a group of three good friends, said they not only come for the trivia night on Tuesdays, but they also like to come to the bar on Wednesdays for the "Family Feud" event inspired by the TV game show. As a team, they all said the Sunshine Saloon trivia night is more competitive than most of the trivia they have been to in the area.

There are a variety of trivia contests open on most weeknights in and around the Tri-Valley. Check out the sampling below and give one a try, or find your own close to home or work.

- Swirl on the Square Inc., Livermore

Repairing a Disagreement with your Beloved & “Physical” vs. “Social” Distancing
By Chandrama Anderson | 0 comments | 909 views