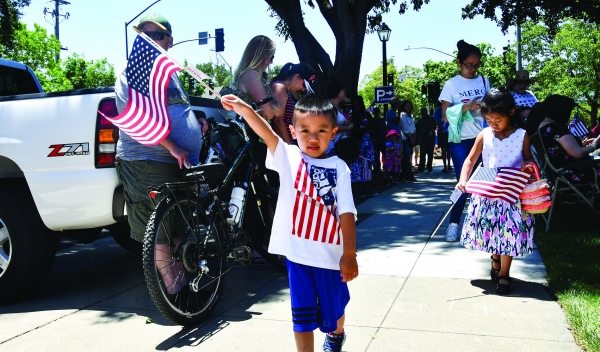 Hundreds of residents of all ages don red, white and blue to celebrate Independence Day at the annual event in downtown Pleasanton each year. This year's festivities are set for noon to 1:30 p.m. on Thursday. (Photo by Michelle Suski) 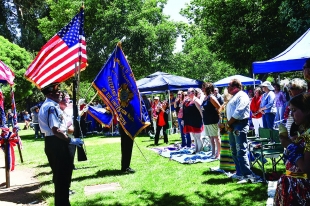 Last year's celebration, like the others before it, included a veterans' colorguard presenting the flags. (Photo by Michelle Suski)

With Independence Day drawing near, Pleasanton residents prime themselves for the celebration.

All community members are invited to Lions Wayside Park in a celebration of the birth of the United States of America, including a free family-friendly concert and optional picnic from noon to 1:30 p.m. on Thursday (July 4).

The Fourth of July event is a large production that attracts hundreds of people of all ages every year, with approximately 100 volunteers involved in the celebration this year, including Boy Scouts Troop 908.

"The all-volunteer event is a fun way to make sure that we remember Fourth of July for more than fireworks and barbecues. We celebrate our shared heritage -- and still have time for other activities in the evening," event founder W. Ron Sutton said.

Permanently named "Celebrating Freedom and its Evolution since the Revolution," this year's event is based on the theme "Memorable American Moments."

Audience members should wear red, white, and blue, and bring their own chairs and blankets. There are several shade canopies, as well as trees in the park to provide shade. As per tradition, returning audience members can look for their photos from last year in the printed program's picture mosaic.

The Lions Club will provide free hand-held American flags to the first 300 audience members who arrive. They will also give children wooden tokens to trade for soft ice-cream cones at Meadowlark Dairy, which is next to the park and also offering "A Dog and a Drink for Two Dollars."

The program will kick off with a welcome from Mayor Jerry Thorne. Then, Pat Bosma as Lady Liberty will lead a singalong of the national anthem and a naturalized citizen will lead the Pledge of Allegiance. The audience can also sing along to "Happy Birthday" for the country.

The event will proceed to give a tribute to all those who have served in the military, past and present, and their families. American Legion Post 238 and Veterans of Foreign Wars Post 6298 will provide the colorguard as the Pleasanton Community Concert Band plays the anthems of each branch of the service.

Led by conductor Bob Williams, the band will also perform musical tributes to celebrate and reflect on eight historic anniversaries: the completion of the Transcontinental Railroad 150 years ago, the 100th anniversary of both the American Legion and Meadowlark Dairy, the production of "Gone with the Wind" and "The Wizard of Oz" 80 years ago, the release of "The Sound of Music" 60 years ago, and the moon landing and the Woodstock concert that took place a half-century ago.

"Visiting these points on the 243-year timeline of our history gives (us the) opportunity to notice the changes in technology, business, transportation, entertainment, and social activity still ongoing in our evolution," Willaims said.

Ken McDonald and Les Duman will be the masters of ceremonies for this year, honoring the 2019 recipients of the Ed Kinney Community Patriot Awards, Sarah Banholzer and Jorge Victoria. This award was named in memory of former mayor Ed Kinney, the first master of ceremonies for the event.

The Independence Day event is produced by local nonprofit organization Pleasanton Community Concert Band for CelebratingJuly4.org, which is part of Make A Difference, Today and Always, with the support of sponsors Heritage Bank of Commerce, ACCUSPLIT and the Lions Club.

"Two decades ago, the Alameda County Fair officials (originally) canceled their Fourth of July fireworks after a shooting had occurred the previous year. We realized that Pleasanton had no other celebration planned for our Independence Day," Sutton said.

"That's why we started 'Celebrating Freedom and its Evolution since the Revolution,'" he added. "We continue to offer a fun, family-friendly way to honor our special national holiday."

Please, please remember folks - leave Fido securely at home if you go to the Danville parade, or any evening fireworks. July 4th and NY Eve are typically your best friend's worst days of the year. Shelters fill up with panicked pooches - some even pre-kill for space in anticipation of the inevitable overcrowding.

The first few seconds after awakening; before I remember the virus
By Chandrama Anderson | 0 comments | 3,391 views

Be aware of hyperbole in numbers and media hype
By Tim Hunt | 14 comments | 1,444 views