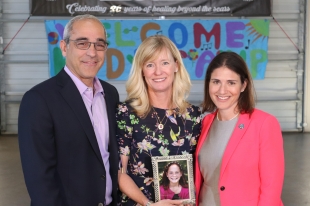 Local State Assemblywoman Rebecca Bauer-Kahan was joined by Louis and Joanne Giorgi, whose daughter Natalie died from a severe reaction to a peanut allergy six years ago. (Photo by Ryan J. Degan)