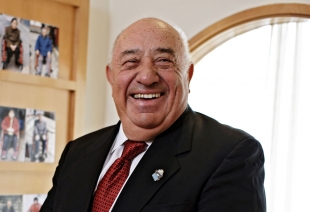 Blackhawk developer Kenneth E. Behring, known for his worldwide philanthropy and booming business and development career that included helping transform the Tri-Valley and serving as the one-time majority owner of the NFL's Seattle Seahawks, died on June 25 at 91 years old.

Behring's son David confirmed the news in a heartfelt social media post late the next afternoon.

"He was both a Lion and a Dragon and could not have lived a fuller life. He loved business, sports, travel, automobiles, family, adventure, life and helping others," David Behring wrote. "His family and friends will deeply miss him and pledge to carry on his legacy. Our family is so appreciative of the hundreds of phone, text and email messages that have pored in."

A large memorial service in Ken Behring's honor is planned for later this month at the Blackhawk Museum he founded in Danville.

Born in Illinois and raised in Wisconsin, Behring grew up in a poverty-stricken family during the Great Depression. The future billionaire worked a variety of jobs from an early age, entered car sales after high school, soon became a dealership owner and earned his first million by 27.

From there, Behring would embark on an extraordinary and lucrative business career that saw him create the retirement community of Tamarac, Fla. in the 1960s, develop the Blackhawk here in the Tri-Valley beginning in 1977 and later build the Canyon Lakes development in San Ramon.

A passionate sportsman, Behring also served as majority owner of the Seahawks from 1988-97 -- a tenure that ended tumultuously after Behring pushed to relocate the team to Southern California amid a stadium upgrade dispute in Seattle. He ultimately sold the franchise for $200 million to Microsoft co-founder Paul Allen.

But, as Behring described, it wasn't until early 2000 (after placing a young, disabled Vietnamese girl in her first wheelchair) that he discovered "a life of purpose," leading to him becoming one of America's most committed philanthropists.

He founded the Wheelchair Foundation that June "to create awareness of the needs and abilities of people with physical disabilities, to promote the joy of giving, create global friendship, and to deliver a wheelchair to every child, teen and adult in the world who needs one, but cannot afford one," according to its website.

His nonprofit venture, which became a division of Behring's Global Health and Education Foundation has delivered or committed more than 1.1 million wheelchairs to date worldwide.

In his later years, Behring said he preferred to focus his time and energy on philanthropic ventures and business activities -- like participating in the stock market -- that help fund those causes.

"All we're doing is doing the things that we think can help make a better world," Behring told the Weekly in 2013, after receiving the newspaper's Tri-Valley Heroes Lifetime Achievement award.

"And I'm not doing it for recognition or for anybody's satisfaction but my own satisfaction of thinking that what I'm doing will, in a small part, maybe make a better world," he added.

Among his other philanthropic efforts, Behring founded the Blackhawk Automotive Museum in 1988, a facility that has since expanded into historical and cultural exhibits as well.

He was a noted contributor to the Smithsonian Institution, including supporting renovations at the Natural History Museum (where the Hall of Mammals bears the Behring name) and "The Price of Freedom" and "American Presidency" exhibitions at the Museum of American History. He was also a recipient of the James Smithsonian Award.

Behring's education endeavors included being an active supporter of the University of California, Berkeley Principal Leadership Institute and the National History Day program -- which he hoped would help young people find a path toward making a true difference in the world.

"I think there's a possibility of a lot of young people becoming leaders. Leaders are not born, they have to be developed," Behring told the Weekly in 2013. "I'm not talking about political leaders, I'm talking about the kind of leaders that can make a better world."

Behring is survived by his wife of 69 years, Pat Behring, and their sons Tom, David, Jeff and Scott, along with 10 grandchildren and two great-grandchildren. His eldest son Michael preceded him in death.

A celebration of life for Behring has been scheduled for July 31 at 4 p.m. at the Blackhawk Museum at 3700 Blackhawk Plaza Cir. in Danville. Casual attire is encouraged. In lieu of flowers or gifts, the family requested people consider contributions in Behring's memory to either Wheelchair Foundation or the Blackhawk Museum Education Transportation Fund.

And there are those who don't believe in capitalism, how could a poor man do so much good for so many ?

Brad is a registered user.


His many worthy causes made life better for many 3rd World people. He was HUGE in wheelchairs that GAVE MOBILITY TO AFFLICTED AND RELIEF TO CAREGIVERS. He also improved potable water for remote villages - and a very big contributor to The Smithsonian.
Thank You Ken for helping make the world a better place.

The first few seconds after awakening; before I remember the virus
By Chandrama Anderson | 0 comments | 3,387 views

Be aware of hyperbole in numbers and media hype
By Tim Hunt | 14 comments | 1,442 views