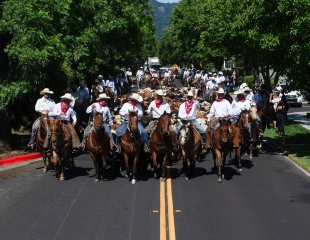 The Pleasanton Cattle Drive rumbled through downtown Pleasanton on Friday, marking the official start of the Alameda County Fair. (Photo by Mike Sedlak)

That was fun! Thanks to those who took the time to put it on. It's neat to live next to a spot that occasionally draws a crowd. I know there are drawbacks for us residents. But to complain would be ignoring the gold in the ore. I've lived around the country. This is a great town. Fun stuff.

2 people like this
Posted by Get the Facts
a resident of Another Pleasanton neighborhood
on Jun 15, 2019 at 11:05 pm

Get the Facts is a registered user.


PW, your article doesn’t say why it’s the last one. Why is it the last cattle drive?


Thanks, Get the Facts. Fair officials announced the decision a month or so ago, saying essentially they appreciated the cattle drive but decided it was time to find a new Opening Day feature. Here was their quote from our previous story: "It has been a wonderful opening celebration, but the Alameda County Fair is always changing and evolving. We want to be able to create new, fun experiences that will keep all our fair-goers excited about attending year after year."

Report Objectionable Content
Email Town Square Moderator
5 people like this
Posted by Disappointed
a resident of Livermore
on Jun 27, 2019 at 2:52 pm

Disappointed is a registered user.


I have it on very good authority that the reason this was the last cattle drive is because the owners of the stores downtown complained about the noise, the dirt, the crowds, the cars, the animal excrement on the street (which was always cleaned up by fair employees). The fair officials of course did not want to say this, so they gracefully exited and now this great tradition, one of the things that made Pleasanton unique is gone for good. I hope they move it to Livermore where people will appreciate it. I actually heard one store owner say, "this is not a country town, we don't need it here". So sad. People are so snobbish and selfish these days.