Learn more about AVHS alum's nonprofit at Inklings on May 23 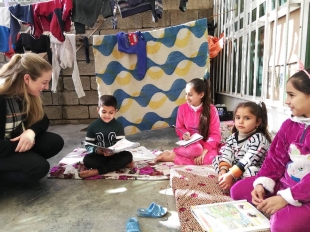 Hope + Future International, a nonprofit founded by Pleasanton native Jessica Binzoni (left), strives to support people and families displaced in combat zones, but living outside of refugee camps, by focusing on education and individual development -- which she sees as key to the long-term solution. (Photo courtesy of Hope + Future)