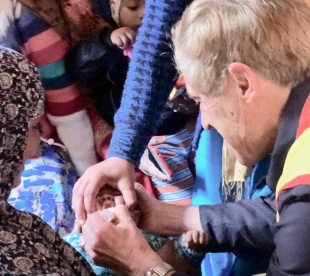 Gary Harrington immunizes a child in India against polio during a recent trip of 70 Rotarians to help in the worldwide effort to eradicate the disease. (Contributed photo)

Look for the banner in Rotary Park that says it all: "End Polio Now."

The Rotary Clubs in the Tri-Valley are having a "flash campaign" in March and April to eradicate the crippling disease worldwide once and for all.

Gary and Nancy Harrington, members of Rotary Club of Pleasanton, recently returned from a 12-day trip to India along with 68 others from across the United States and Canada who helped with the vaccinations. India, with a population of 1.3 billion, eradicated polio in 2011, but remains vigilant due to immigrant children that may carry the virus.

Neighboring Pakistan, and Afghanistan, had the cases of polio reported last year, the only ones worldwide.

The global fight began in 1988 when Rotary joined the Bill & Melinda Gates Foundation, the World Health Organization, the U.S. Centers for Disease Control and Prevention, and UNICEF. Since then more than 2.5 billion children have been immunized in 122 countries, reducing polio cases around the globe by 99.9%.

Rotary Club members ask for the support of the community to help with their efforts by donating any sum of money directly to endpolio.org.

The first few seconds after awakening; before I remember the virus
By Chandrama Anderson | 0 comments | 3,383 views

Be aware of hyperbole in numbers and media hype
By Tim Hunt | 14 comments | 1,436 views