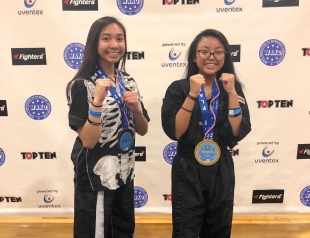 The Amador Valley girls basketball team saw their Cinderella run through the North Coast Section playoffs come to an end against top-seeded Carondelet in the semifinal round last week.

The 12th-seeded Dons, who posted upset wins over higher-seeded American and California in the first two rounds, couldn't overcome Carondelet's fire-power in the semifinal, losing 74-49 on Feb. 20. Jennie Yang had 18 points for Amador, with Isabella Mauricio adding 9 points.

The Cougars went on to beat Heritage to win the NCS Division 1 championship.

With the strong NCS run, the Dons earned a spot in the CIF State tournament, with the first-round results pending as of Tuesday afternoon.

The Falcons posted a convincing 6-0 win over Castro Valley in a non-league game on Feb. 21.

Nicole May went the distance in the circle, allowing only one hit and striking out 17 Castro Valley batters.

Courtney Beaudin, Hailey Hayes, Ally McElroy and Gianna Lyng each had a double for the Falcons. May also drove in a pair of runs, with Beaudin, McElory and Ellen Ebbers each driving in a run.

In a game that was a tale of two halves, the Falcons came from behind to open their non-league campaign with a 11-10 win over Acalanes.

Acalanes scored the first seven goals of the game and finished the first half with a 7-1 lead. Another goal early in the second half made it 8-1 Acalanes.

The Falcons then woke up, outscoring Acalanes 10-2 the rest of the way to pick up the thrilling win.

Foothill goalscorers were: Audriana Templeman, Sadie Brown, Drew Paktaghan, Nikki Trueblood and Eva Bull. Brown, in her debut game as a freshman on the varsity, led the scoring with 4 goals, followed by junior Paktaghan with 3 goals.

In doubles, the teams of Robert Heeter/Brett Miller, Vishesh Pithadiya/Marnas Aavula and Ethan Allavarpu/Nithilan Muruganandham all won straight set matches, not losing a game in the process.

Aying is a two-time WAKO Junior World Championships bronze medalist, competing in Ireland in 2016 and Italy in 2018.

The busy spring sports season has gotten underway -- that is, the sports that can be played when there isn't a downpour.

That means it is time to get your results in so we can write about the hard work the student athletes are turning in at Amador and Foothill! It will take a volunteer all of 15 minutes maximum a week to shoot me an email by Sunday with the results for your son's or daughter's team.

You don't have to be a writer -- that's my job -- so just send me the results, as well as top performers each week and I will put it together. Send your email to me at acesmag@aol.com by noon each Sunday and see the result in print the following Friday.

Of course, we are always looking for photos as well, so send those along with the identification for the players, as well as who gets the credit for taking the picture.

The first few seconds after awakening; before I remember the virus
By Chandrama Anderson | 0 comments | 3,380 views

Be aware of hyperbole in numbers and media hype
By Tim Hunt | 14 comments | 1,434 views