The Pleasanton City Council gave its approval to the city purchasing the commercial property at 4363 and 4377 First St., which includes these two buildings. Tenants would be offered relocation compensation. (Photo by Jeremy Walsh) 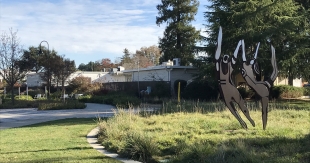 The view from the Firehouse Arts Center entryway shows the backside of the First Street buildings city officials hope to acquire in part due to the property's closeness to the Firehouse and Lions Wayside Park. (Photo by Jeremy Walsh)

The new downtown parking deal was an unexpected surprise. Well done- a win win! Appreciate the Council investing in more downtown parking to help our downtown businesses survive and make it easier for our residents to support the businesses.

Like this comment
Posted by Fifty Years Here
a resident of Pleasanton Heights
on Dec 8, 2018 at 9:08 am


We are on the right track when the city is a Buyer of Downtown property instead of a Seller!

I'm not holding out hope the city will also do the right thing and purchase the property across from the library to build a parking garage for more downtown and ACE train parking.

You Can Help: Scents and Migraines
By Chandrama Anderson | 0 comments | 1,359 views