Afternoon I-680 commute toward Pleasanton ranks as 4th-worst in Bay Area | News | PleasantonWeekly.com |

I-580 through Tri-Valley makes three appearances on most-congested list, but none worse than 14th 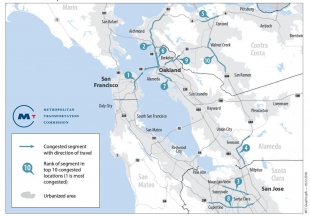 Map calls out locations of top 10 worst commutes in the Bay Area during 2017, according to Metropolitan Transportation Commission. (Image courtesy of MTC)

The Interstate 680 commute across the Sunol Grade ranked as the fourth-worst Bay Area commute in 2017 for the second year in a row, according to the annual most-congested list compiled by the Metropolitan Transportation Commission.

Overall, the MTC reported that traffic congestion delays leveled off in 2017 after commute times worsened for four consecutive years from 2013-16.

"The good news here is that the average Bay Area commute hasn't gotten any worse," said Rohnert Park City Councilman Jake Mackenzie, who is serving as MTC chair. "The bad news is that it hasn't gotten any better either."

Bay Area drivers faced an average of 3.6 minutes of congested delay last year, matching the record high set for the region in 2016 and representing an 80% increase from the 1.9-minute average delay in 2010, according to the MTC. "Congestion delay" is defined by MTC as time spent in traffic moving at speeds slower than 35 mph.

For 2017, the Tri-Valley area made five appearances on the "50 worst commutes list."

Tops on the local list was the I-680 commute from the South Bay up toward Pleasanton at No. 4. The northbound segment from Scott Creek Road in Fremont to Andrade Road in Sunol between 1:55-8:20 p.m. saw a daily delay of 6,280 vehicle-hours.

One other Tri-Valley route ranked in the top 10: The northbound afternoon commute on I-680 from Sycamore Valley Road in Danville to Buskirk Avenue/Oak Park Boulevard in Pleasant Hill came in at No. 10. That marked an improvement of two spots from its No. 8 ranking the previous year (5,950 vehicle hours delay in 2016, compared to 4,500 hours in 2017).

The eastbound I-580 afternoon commute into Pleasanton ranked as the 14th-worst -- from Crow Canyon Road/Grove Way in Castro Valley to Hacienda Drive in Pleasanton. The similar commute was 10 spots better the year before, ranking 24th in 2016.

And in 44th was the I-580 evening commute from First Street to the lane reduction east of North Flynn Road in Livermore.

As for the overall rankings, consistency seemed to be a theme -- certainly at the top.

Each of the top four worst commutes retained their position from the year before, including I-680 northbound toward Pleasanton.

Topping the list for the fourth year in a row was the afternoon slog on northbound Highway 101 and eastbound I-80 from Cesar Chavez Street in San Francisco to the Bay Bridge's Yerba Buena Island Tunnel, where commuters collectively logged an average of 14,600 vehicle-hours of delay between 12:30-10:30 p.m. each weekday.

Staying in second place was the westbound I-80 drive from Highway 4 in Hercules to the Bay Bridge toll plaza -- all day, from 5:25 a.m. to 6:55 p.m. In third again was the afternoon commute on southbound Highway 101 from Sunnyvale to San Jose.

Rounding out the top five was the eastbound afternoon drive from Highway 4 in Martinez to Port Chicago Highway in Concord, which jumped up five spots from its 10th-place ranking in 2016.

Half of the top 10 worst commutes were in Alameda County, and more than three-quarters of all congested delay in the Bay Area last year occurred on freeways in Alameda, Contra Costa and Santa Clara counties.

"There's no question that our freeways haven't kept pace with the bustling economy," Mackenzie said. "We have more vehicles on the road getting people to and from their jobs, more buses taking people to and from work, and more trucks making more deliveries. This highlights the need for more affordable housing closer to jobs, for better transit options and for key infrastructure projects."

He also used the timing of the MTC ranking release to criticize Proposition 6, the statewide ballot measure that would eliminate the recently approved gas tax and vehicle license fee increases. He argued that key congestion-relief projects, like I-680/Highway 4 interchange improvements in Martinez, would lose funding and could be suspended if Prop 6 passes at the polls next week.

Are they trying to pat themselves on the back? Where do they come up with this stuff? I experience 45 minutes of delay each way to work.

15 people like this
Posted by Pleasanton resident
a resident of Another Pleasanton neighborhood
on Oct 31, 2018 at 9:16 am

The new commute lane has made traffic a mess!!! Accidents every week.
Everyone on their phone, people rear-ended all the time!!!
People jumping in and out of the commute lane to pass people.
This area has really changed for the worse.

Report Objectionable Content
Email Town Square Moderator
6 people like this
Posted by Kris
a resident of Amador Estates
on Oct 31, 2018 at 10:37 pm

What a funny headline....Like we don't already know this....I remember specifically thinking back in the 70's, that one day we would be like L.A. We are getting close folks, makes me sad.... :(

Report Objectionable Content
Email Town Square Moderator
2 people like this
Posted by Robert Adam
a resident of Another Pleasanton neighborhood
on Oct 31, 2018 at 11:22 pm

It's simply the way it is. Get books-on-tape or a Hoopla or Audible subscription. You'll be home before you know it.

Report Objectionable Content
Email Town Square Moderator
12 people like this
Posted by DKHSK
a resident of Bridle Creek
on Nov 1, 2018 at 8:18 am

Only if they included kids in the equation.

Try commuting anywhere to silicon valley between the hours of 7am-10am and back from 2:30pm-7pm.

Report Objectionable Content
Email Town Square Moderator
3 people like this
Posted by Michael Austin
a resident of Pleasanton Meadows
on Nov 1, 2018 at 12:45 pm

Seems to me there is big rig turned over on one of the freeways everyday of the week. During the lunch hour I came up the 880 north to Auto Mall Parkway from San Jose. There are two big rigs turned over, one at Dickson landing, the other at Mission.

Report Objectionable Content
Email Town Square Moderator
4 people like this
Posted by Pleasanton resident
a resident of Another Pleasanton neighborhood
on Nov 2, 2018 at 2:38 pm

Used to be a nice quant place to live. not any more. freeways a mess. Accidents every day. People who don't know how to drive or are on the phone. Not to mention the people begging for money with their signs on the freeway exits and in town. yuck.

Report Objectionable Content
Email Town Square Moderator
6 people like this
Posted by Me Too
a resident of Another Pleasanton neighborhood
on Nov 2, 2018 at 9:37 pm

I experience at least 3.6 minutes of delay everyday on Santa Rita. I KNOW I-680 is at least 10 times worse. Not sure where their data comes from.

It is tough when most of your decision making on whether to go somewhere is based on traffic.

Report Objectionable Content
Email Town Square Moderator
5 people like this
Posted by Pleasanton Parent
a resident of Pleasanton Meadows
on Nov 3, 2018 at 8:58 am


The gridlock and panhandling is out of control - i commute through fremont and its a disaster. Motorcycles are now regularly splitting all lanes, not just the left. Cars coming to a full stop at the last min on an offramp to merge in while cars existing slam on brakes.

....wheres all that tax money going? Definitely not back to the people in the form of infrastructure improvements

Report Objectionable Content
Email Town Square Moderator
9 people like this
Posted by DKHSK
a resident of Bridle Creek
on Nov 3, 2018 at 9:20 am


This is the government that over 50% of the state has been electing for some time now.

NOTHING is ever improved because if it was, there'd be no reason to continue sucking our taxes and spending it in other ways, which is EXACTLY what is happening.

But, over half of you reading and commenting on this report will continue to vote for the same politicians who will continue to feed you the same lines and take all our taxes to do NOTHING to fix this quality-of-life issue.

Report Objectionable Content
Email Town Square Moderator
6 people like this
Posted by Map
a resident of Del Prado
on Nov 3, 2018 at 2:41 pm

What a bunch of morons, what did that study cost us taxpayers?? What does the Rohnert Park city councilman know about traffic here, he should try driving around here at “prime time “ what a cluster. Multiple wrecks everyday, cut-thru traffic with plenty of bad drivers to keep it interesting around here, kind of like playing Russian Roulette with vehicles on our city streets. More stop signs, red light cameras and speed bumps please.

There was the drunk driver that crashed and shut down north bound I-880 at three O'clock in the morning Saturday, it took eight plus hours to get the I-880 reopened for traffic.

Report Objectionable Content
Email Town Square Moderator
6 people like this
Posted by Help
a resident of Foothill High School
on Nov 3, 2018 at 11:15 pm

Report Objectionable Content
Email Town Square Moderator
4 people like this
Posted by Tom F
a resident of Downtown
on Nov 4, 2018 at 7:42 am

3.6 minutes delay? hahahahahaha Where the hell come up with this figure? It takes damn near 20 minutes just to get to 680 from the downtown area at 9am. First St. is a parking lot. It's unreal. That traffic nightmare could be relieved by metering the west bound stop lights at Valley and the quarry on Stanley. Say 5-10 minutes red, then one minute green to stem the flow of traffic on First St. This would also discourage the cut through traffic coming from 580 and keep them on 580 to the 680 interchange.

Report Objectionable Content
Email Town Square Moderator
4 people like this
Posted by Flightops
a resident of Downtown
on Nov 15, 2018 at 5:27 pm


It seems like the traffic lights are timed to encourage cut thru commuters, shorten up the timing on those long green lights, add more stop signs and traffic lights on Bernal, Valley and 1st st, add red light cameras, drop Santa Rita speed limits to 35mph from 45mph and increase traffic enforcement during commute times. Let’s take back our streets!!

Repairing a Disagreement with your Beloved & “Physical” vs. “Social” Distancing
By Chandrama Anderson | 0 comments | 1,027 views