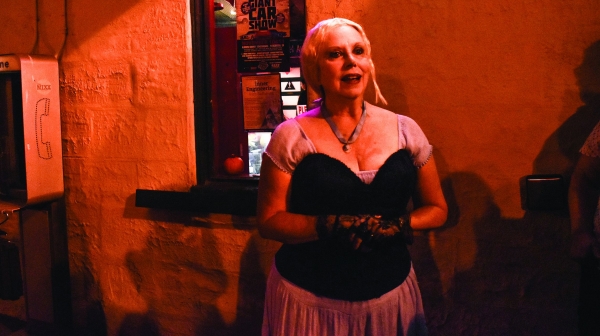 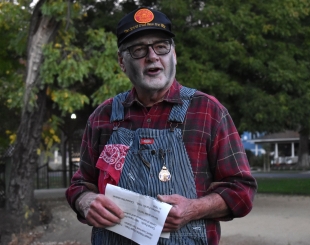 Museum volunteers take on the roles of historical characters and ghosts who supposedly haunt sites downtown, including this railroad conductor at the Bernal Avenue and First Street intersection. (Photo by Erika Alvero)

If you're taking a stroll down Main Street, make sure to look up as you pass by Gay Nineties Pizza. You might catch a glimpse of the Lady in Blue, decked out in petticoats and a scandalous bodice, surveying the bustle of cars and pedestrians beneath her.

Some say the 19th century "woman of ill repute" liked Pleasanton enough to stick around for a century and a half.

And she's just one of the many characters who stayed, according to the organizers of the Museum on Main's popular annual Halloween tradition, the Ghost Walk.

"A lot has changed but there's still a lot of continuity in terms of downtown," said Sarah Schaefer, director of education at the museum. "So I don't know if that might increase the amount of ghosts that we have. Whether it was so great to live there -- I'm sure that's what Pleasantonians would say."

The Ghost Walk intermingles local history and spooky lore, with "Ghost Host" tour guides taking participants through the haunted sites of downtown Pleasanton, where they are regaled with tales by museum volunteers and teen improvisational actors from Creatures of Impulse.

"There's too many stories and too many credible people who have come up and said, 'I've seen this' or 'this happened to me,' for even the skeptics, to start thinking, 'well, maybe,'" Schaefer said. "And that's the fun of it. You don't know."

The walk takes place on the last two weekends of October. Starting at the Museum on Main (which is also allegedly haunted), tour-goers traipse past diners and evening strollers, zigzagging from Dr. Adamos' dentist office to Gay Nineties to Kottinger's Barn, among other sites -- the red dots on Ghost Hosts' maps are plentiful.

The walk was started over a decade ago by Museum on Main board member Charles Huff. Rebecca Bruner, a local realtor and current board member, joined the effort soon after.

They took a team of "ghost trackers" through town, who posted cameras and recording devices in the buildings where ghosts were rumored to frequent. They also brought in psychics, for the more specific details, and gathered some interesting stories, particularly in the older buildings.

"Sometimes they don't know that they've passed," Bruner said. "And so they're stuck. Sometimes they stay because they choose to stay behind to see maybe what loved ones are doing."

To hear the "ghosts" tell it, Pleasanton was a lawless, wild place in the mid-1800s, a bustling railroad stop filled with nefarious characters. And historians seem to corroborate this -- in the mid-19th century, the closest police force was in Oakland, meaning a lot of criminals sought refuge in what was then called Alisal, earning it the title of "Most Desperate Town of the West."

By the 1950s, Pleasanton had transformed somewhat, though not exactly to the present-day scene with restaurant-goers dining along Main Street in the peaceful twilight of a Friday evening.

"In 1950 there were more bars per person than any other place in the nation," said Michael Bruner, Rebecca's son and the "ghost" at the Pleasanton Hotel stop. "There was a mandatory curfew to keep kids off Main Street after nightfall to keep them away from the bar fights alone."

The Gay Nineties site, built in 1864, used to be a Wells Fargo office, a general store and a bar; and museum staff believe that the upstairs was a brothel. The Lady in Blue, as legend has it, was a prostitute at the site who fell in love with a man, promising to give her a better life, but then "led to her death," according to the psychic.

But despite her tragic demise, the lady apparently has fond memories of Pleasanton, because she stayed put, watching out the upstairs window. She's a mostly benign presence, co-existing fairly harmoniously with the building's owners when they have lived in "her" quarters, though apparently not a plant-lover -- whenever anyone has tried to grow flowers at the windowsill, she has killed them off, Schaefer said.

Another ghost has also taken up residence in the basement of Gay Nineties, though this one seems to be a bit more "mischievous," Schaefer said. Tales of pizza boxes flying off the shelves and of people getting trapped in the freezer inexplicably are attributed to this ghost -- as is the mysterious "BOO" etched into the first floor mirror at the now-pizza parlor. If you pass by the mirror and throw a glance back over your shoulder, you can see the letters glimmering in the glass.

No amount of cleansing has been able to remove the letters, Schaefer said.

Perhaps one of the most-renowned ghost stories to linger around Main Street comes from the Pleasanton Hotel, the site of the former general store built by John Kottinger in 1854 and then a hotel about a decade later.

Much of what is "known" about this story comes from a psychic who examined the various buildings downtown -- she determined that the building was haunted by a ghost named Lily, a former prostitute working at the hotel.

Lily was killed by a jealous man, the psychic said, who then fled the scene -- his ghost now haunts the Museum on Main.

"He didn't know if Pleasanton, how they felt about a hanging, so he didn't want to stick around and find out," Rebecca Bruner said.

Now the Pleasanton Hotel (though still historic, is not the original building, which burnt down at one point), consists of offices upstairs, whose tenants have occasionally felt her presence. On a previous Ghost Walk tour, a woman recounted having seen a floating pen and papers tossed off her father's desk there when she was a little girl.

A woman who worked as a masseuse there had a skeleton model hanging on the wall. She kept getting "pestered" by an unknown presence, Schaefer said, until she took down the skeleton.

"I guess Lily wants to be the only ghost/dead thing in the Pleasanton Hotel," Schaefer said.

And Lily will be further memorialized in a few months, with the opening of Lily's Spirit Room downstairs.

Ghost stories continue to collect over the years, and the annual Ghost Walk series changes to reflect this, much like history textbooks. Those who take part in the tour are attracted for a variety of reasons, whether they want an educational meander through familiar sites or appreciate a family-friendly way to celebrate the Halloween season. This year's final rounds of Ghost Walks will take place Friday and Saturday.

Regardless of whether you are a skeptic or believer, though, the ghost stories are important, according to Michael Bruner.

"The reason I love these stories, whether or not you believe in ghosts, is because they tell such a vivid story of what Pleasanton used to be," he said. "And if you consider that Pleasanton went from being the most desperate town of the West, to being Time magazine's 'Most Drinkingest Town in America' in the 1950s -- it really did -- to being one of the most livable towns in America, it's a Cinderella story."

The Impact of COVID-19 on Our High School Juniors and Seniors
By Elizabeth LaScala | 0 comments | 1,846 views

The first few seconds after awakening; before I remember the virus
By Chandrama Anderson | 0 comments | 697 views