Roll of the dice: 'Guys and Dolls' onstage at Firehouse | News | PleasantonWeekly.com |

Roll of the dice: 'Guys and Dolls' onstage at Firehouse 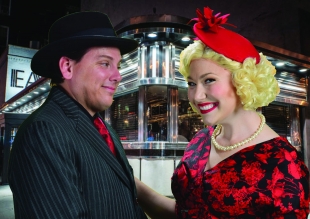 Nathan Detroit (Robert Lopez) listens to laments from Miss Adelaide (Morgan Stinson) that they have been engaged 14 years. (Photo by Josh Milbourne)