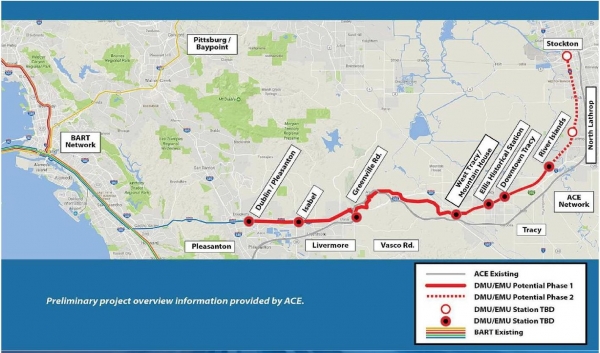 Why aren't they planning to use electric trains? The design is already outdated.

Linda Kelly is a registered user.


The Zone 7 Board voted 4-3 this evening to accept Scenario 1 rate increases, for a period of the full four years. Disappoining for ratepayers.

Wilma is a registered user.


The BART board is terrible. I don’t bother riding anymore due to security concerns or car break-ins. They overpay their employees and their priorities are screwed up. Plus parking is always in short supply and I refuse to take a bus that requires a one hour trip to get to the station.

Report Objectionable Content
Email Town Square Moderator
4 people like this
Posted by Robert S. Allen
a resident of Livermore
on Oct 19, 2018 at 3:33 pm

Extending BART to Greenville was a better choice until AB 2923 became law, giving BART prime authority over land use and building near its stations.

Valley Link should work well. BART needs more and longer trains (only 9 cars now; could be 10) when enough of its new cars arrive. It should also add a new route that I call the Purple Line to downtown Oakland and Richmond and re-route the Orange Line to Bay Point instead of Richmond.

Interim Isabel parking for Valley Link with a freeway express bus meeting every train would ease parking problems at the Tri-Valley stations.