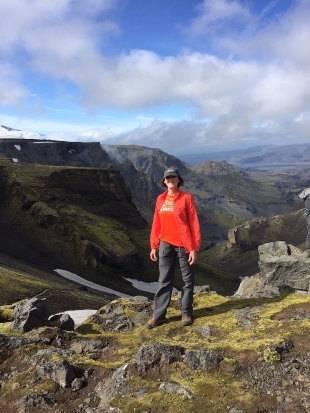 Barbara McCarrick, 59, hikes through glaciers and volcanoes in Iceland to benefit the Multiple Myeloma Research Foundation. (Photo courtesy of Uncage the Soul Productions)

When Barbara McCarrick began experiencing hip and back pain in her late 40s, she attributed it to her age.

"Between work and age, you never know," said McCarrick, an occupational therapist who at the time was working at the Pleasanton Nursing and Rehabilitation Center. "I ignored it for a while, then I went to be seen. The X-rays didn't show anything but I had physical therapy and got cortisone."

When the pain became worse, she went to a chiropractor who did more X-rays, which showed rib fractures. The breaks were caused by multiple myeloma, a cancer of the plasma cells. Malignant plasma cells accumulate in the bone marrow, crowding out the normal plasma cells that help fight infection.

"I had six rib fractures. The disease leaches the calcium out of the body, it makes the bones brittle," she explained. "I also had a pelvic fracture and a humerus fracture."

She started treatments immediately, undergoing five rounds of chemotherapy before pneumonia landed her in the hospital. She also received stem cell transplants.

"They had harvested stem cells from me," McCarrick said. "I had one transplant in 2009 and the second one January 2010. Tandem transplants are a protocol doctors do if you are strong enough to tolerate it."

The doctors determined she was in remission and she returned to work, in San Ramon. She relapsed in 2013 but has now been in remission since January 2014.

"There is no cure, you are under constant care," she noted.

Upon her initial diagnosis, McCarrick joined the Multiple Myeloma Research Foundation's Team for Cures, raising money and participating in its annual fundraising 5K walk/runs in San Francisco each March.

Then last year she read about endurance hikes to such places as Mount Everest and Kilimanjaro for the cause.

"I thought, I'm healthy enough now, I've got to do this. I need to bring awareness," she said.

McCarrick participated in Moving Mountains for Multiple Myeloma from Aug. 8-12, one of 15 people who tackled a challenging hike in Iceland. Called Fire and Ice, the hike brought participants through volcanoes, glaciers, geysers, hot springs, waterfalls and mountains.

"There was a mix of ages and circumstances, and they were from all parts of the country," McCarrick said. "It was a wonderful group of people -- we just bonded."

McCarrick has lived in Pleasanton for 33 years -- her three children attended Walnut Grove and Donlon elementary schools, Pleasanton and Hart middle schools, and Foothill High. She has hiked the Pleasanton Ridge, Mount Diablo and Mission Peak, but Fire and Ice was a challenge.

"We hiked for three days," she said, from Thorsmork to Fimmvorduhals to Skogar, about 30 miles.

The first day was beautiful and sunny, she recalled, and the team spent the night in a large cabin.

"The second day, when we hiked across glaciers and volcanoes, we spent the night in a hut between two glaciers," she remembered. "We followed the waterfalls hiking down -- it was just gorgeous."

"Basically I've got this giant list from my 5K San Francisco walks," she said with a laugh. "I did that 5K in March and I didn't want to put the squeeze on people twice. But I raised $10,000. Friends and family were very, very generous -- I'm so grateful."

McCarrick, who now works in Castro Valley, said that her experiences with multiple myeloma have made her better at her job.

"I was at UCSF for weeks in the hospital and I have more of a perspective of what my patients go through," she said.

An estimated 30,000 adults will be diagnosed with multiple myeloma this year, and 12,600 people are predicted to die from the disease.

McCarrick is committed to raising funds and awareness for those newly diagnosed.

"I want them to know that the diagnosis isn't always a death sentence," she said. "I have been in remission since January 2014. With research, clinical trials and new treatments, I will, hopefully, have a long remission and soon, a cure."

The Impact of COVID-19 on Our High School Juniors and Seniors
By Elizabeth LaScala | 0 comments | 1,837 views

The first few seconds after awakening; before I remember the virus
By Chandrama Anderson | 0 comments | 685 views