Editorial: The value of community journalism 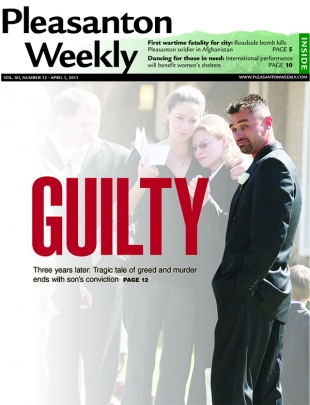 The Pleasanton Weekly's award-winning coverage of the 2008 Castlewood murders reached its climax with this April 1, 2011 cover story days after Ernest Scherer III (right) was found guilty of murdering his parents for a lucrative inheritance. (Photo by Harry Arruda. Cover design by Lili Cao).

2 people like this
Posted by EARL WHETSTONE
a resident of Another Pleasanton neighborhood
on Dec 29, 2017 at 10:56 am

PLEASE TELL US HOW WE CAN HELP TO KEEP YOU ON LINE/IN BUSINESS FOR US. THANKS.

10 people like this
Posted by Gina Channell, Pleasanton Weekly Publisher
a resident of Downtown
on Dec 29, 2017 at 11:32 am


Hi Earl,
We're doing OK and not going anywhere in the near future, but it gets more difficult every year.
You can help by patronizing our advertisers and telling them you saw their ad on PleasantonWeekly.com or in the Pleasanton Weekly print edition.
You can also become a member, which gives you unlimited access to the website, free delivery of the paper if you live in Pleasanton, tickets to events and other perks.
PleasantonWeekly.com/circulation
Thank you for reading, commenting and, most of all, for caring.

1 person likes this
Posted by Michael Austin
a resident of Pleasanton Meadows
on Jan 1, 2018 at 6:16 pm


I have been getting my news on line for several years, along with listening to the radio while I am on the road, and the radio when I am at my desk writing reports.

This past year, the online news is so interrupted with pop up adds and just junk stuff generally, I immediately navigate out. These past two holiday weeks, I set down in front of the television for evening news, and was blasted with infomercials.

Report Objectionable Content
Email Town Square Moderator
1 person likes this
Posted by DKHSK
a resident of Bridle Creek
on Jan 3, 2018 at 8:17 am


Right here in Tim's latest blog is a subject that is perfect for a small town news organization to investigate: Web Link

How is it that a local government can be SO incompetent, yet not have a paper investigate said incompetence?

Perhaps the reason newspapers are failing is that they have stopped doing investigative reporting, censuring descriptions of perpetrators, and basically been a reporting arm of a political party or politician?

The stories that can actually make a difference are right there in front of you and your profession. Yet instead of un-biased reportage, you've (and I don't necessarily mean you or PW) decided to take a side.

Go ahead and read the NYT or WAPO or any other large city/regional paper and see for yourself.

Report Objectionable Content
Email Town Square Moderator
4 people like this
Posted by Gina Channell, Publisher
a resident of Downtown
on Jan 3, 2018 at 8:47 am


Hi DKHSK, we would love to do more investigative journalism and dig into issues like the one in Tim’s blog. Why don’t we? Limited resources.
This is the point of the editorial.... The Pleasanton Weekly is a small business and, in addition to paying rent and PG&E, we pay journalists like Tim. Our editorial staff consists of three full-time employees and a handful of freelancers. We cover 5 communities.

To give this a bit of perspective, I ran a division of the Chicago Sun-Times in Illinois and the division covered 12 communities with papers and websites very similar to the Pleasanton Weekly and its online sister publications. There were roughly 75 journalists dedicated to those papers at the time (late 1990s / early 2000s) and we could employ them because the business model kept a steady stream of revenue coming in.

Yes, we need the investigative journalism for exactly the reasons you pointed out. We also need to fund the journalism.


A bit more perspective: we had a publication in Dublin about the same time this issue began. The community did not support it financially and we had to cease publication. The same thing happened in Danville.

This might have had a different outcome if journalists been covering it and the public was well informed.

The only time I've consistently seen the Pleasanton Weekly reporters are at Rotary club meetings, Chamber of Commerce gatherings and at the Economic Vitality commission meeting.

My observation is also that I have never seen an investigative reporting piece or any piece critical of a commercial business in the Pleasanton Weekly publication. Even when Direct Buy was located in Hacienda Business Park, scamming local residents by the hundreds, I never saw anything critical about what what was occurring in the newspaper.

The weekly has had a reporter at zone 7 meetings at least when water rate increases were being discussed.

The Regional Water Board is different from Zone 7, and I would be surprised if the Pleasanton Weekly has any idea what the Regional Water Board is. I do not know if any Pleasanton Weekly reporter or staff member or editor has any experience whatsoever in covering various actions of government entities within a city (state, local, Federal, special districts). I would be completely surprised if they get mailed any of the agendas. If they did or looked them up online, how could they have possibly miss this in 2013?