'Every time (bad) thoughts came into my head, I kept telling myself not to think that and to stay positive,' Foothill senior recalls

Foothill Falcons senior guard Michael Smith (No. 4) high-fives teammates during a break in the action during his season debut against Tracy last month, just over a year after he suffered a gruesome leg injury while playing football for Foothill. (Photo by Mike Sedlak) 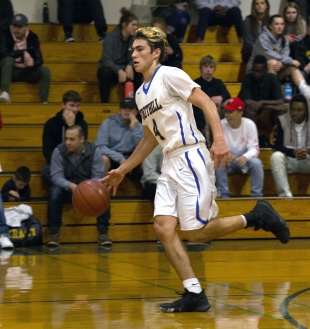 Smith dribbles up the court during his season debut against Tracy last month. (Photo by Mike Sedlak)

In the fall of 2016, Foothill High School's Michael Smith was living on top of the high school world.

Smith was coming off a sophomore year that saw him play on both the varsity football and basketball teams for the Falcons, impressive achievements in the ever-important social circles around Foothill.

It was the start of his junior campaign and everything pointed to the 6-foot-2 Smith having an amazing, final two years of high school.

But that all changed in an instant in an early-season football game.

It was Sept. 9, 2016, and the Falcons were hosting Monte Vista in a showdown of East Bay Athletic League powerhouses.

Smith was involved in a play and took a helmet to his ankle. Life changed that fast.

"When I first realized I was hurt, I felt my ankle was just dangling there," recalled Smith, now a senior at Foothill. "I thought it might be a high-ankle sprain. Then when I found out I needed surgery, my heart dropped."

Smith suffered a broken fibula and a torn ligament that connects the fibula and tibia -- far worse than a high-ankle sprain.

The family sought out three medical opinions, with the last coming from the well-known and respected Dr. Arthur Ting. Also known as the "doctor to the stars" because of the number of celebrity patients he has worked with, Ting told Smith he needed pins in his leg.

The surgery took place 10 days after the injury, and Smith was full of high hopes.

"I was hoping at that point to be back playing basketball by the first of the year," Smith said.

But it wasn't to be.

"By mid-November (2016), I had not progressed as far as I thought I should be progressing," he said. "I realized I had a nerve block, but it was taking longer than I expected for the numbness to go away."

This in turn was a defining moment for Smith. A lot of teenagers might have packed it in, feeling sorry for themselves and not focusing on the bigger picture. Smith chose to fight rather than settle for excuses.

"Every time (bad) thoughts came into my head, I kept telling myself not to think that and to stay positive," Smith explained. "I started pushing myself harder. I was up to seven different physical therapy sessions over the course of five days at three different places. I kept thinking I would come back better."

That Smith increased his physical therapy and worked to get healthy rather than give up certainly didn't catch Foothill Falcons basketball coach Jason Wallis by surprise.

"He's a competitor," Wallis said of Smith. "He's got that fire you can't coach. I remember when he was a sophomore, he would come into the gym after football practice. He couldn't practice with the team yet because football season was still going on, but he would work on his shooting and dribbling on the side after he had been out at football practice. That's the kind of kid he is."

Smith needed to be home-schooled some during his recovery, but he was able to stay associated with the Foothill basketball team by attending the games and sitting on the bench.

"Our goal was to keep him involved in the program," Wallis said. "We asked him things during the game, like what he saw. I think when you can't play, you get a lot different perspective of the game."

Smith admitted those times did improve his mental aspect of the game, but there was still the fire burning to get back on the court. The long wait finally ended last May.

Smith's Amateur Athletic Union (AAU) team had a tournament in Reno that he attended without thinking of playing. Those plans changed when his coach asked if he wanted to play in a game.

Dr. Ting had given him clearance to do what he was comfortable doing, so Smith jumped at the chance to get on the court.

The results were mixed. It was incredible to be back on the court, but he found he still had a long way to go.

He took a break from basketball after May, but kept working on his rehab. He finally returned to the court and gave it another shot in summer league.

Once again, it wasn't the successful return he was hoping for.

"Summer league was tough," Smith said. "I still wasn't the player I wanted to be. I wanted to be back strong for my senior year."

There was one other aspect plaguing Smith as he was on the shelf for his junior year -- college recruiting.

A starter as a sophomore, Smith figured to be among the elite players in the EBAL as a junior and senior. To intensify the disappointment, the junior year is a prime time for college coaches to see prospective players, but that was gone out the window.

Undaunted, he pushed off the series of setbacks, persevered and found ways to make it work. Smith's family sent him off to the camps in Georgia and Texas in the fall to gain some exposure.

"I knew I needed to get out there," Smith said of attending the out-of-state camps. "I didn't have much to lose. No one knew me, but I just wanted to play."

Smith was getting stronger -- and healthier -- allowing for improved play. Heading to those camps was the beginning of the return he had been searching for.

"I was feeling really good at those camps," Smith said. "I had come a long way and was able to get some good film."

Some colleges are taking note.

"I have been talking with some coaches," Smith said. "I'm very excited about that."

Fast-forward to the last couple of weeks, when the Foothill basketball team opened its 2017-18 season. Opening night, the Falcons hosted Tracy in a non-league contest, and though the Falcons lost the game, Smith was back as a starter, coming out of the gate like he had never been away.

There's still some numbness, but to the casual observer, Smith looks as good as ever and is ready to be one of the elite players in the area again.

"I've gotten better at some aspects -- my first step, ball-handling," he said. "I see things differently. My basketball IQ has gotten better."

The hard, often frustrating, return to playing basketball has given Smith a new appreciation and perspective of life in general. It's a lesson often lost on the youth of today, but that's far from the case with Smith.

"It was a character builder," Smith said of the injury and the recovery. "I am very respectful and grateful for everything I have. I make better decisions and don't take anything for granted."

The lessons he has learned in turn could help benefit others when faced with the same daunting climb.

"I would tell them to put their head down and work," Smith said. "Keep working and see each month how far you have come. Don't get distracted and keep focused."

His comeback should be inspirational to many. Count Wallis as one.

"When he first got hurt, I was sending him stories about other athletes that came back from bad injuries," Wallis said. "Now going forward, I will share his story to inspire kids when they get hurt."

Congrats Michael. An inspiration to all of us. Good luck this season and with your college aspirations. Thank you!

Repairing a Disagreement with your Beloved & “Physical” vs. “Social” Distancing
By Chandrama Anderson | 0 comments | 1,209 views