Hanukkah fare: Stories behind foods intrinsic to the Jewish Festival of Lights 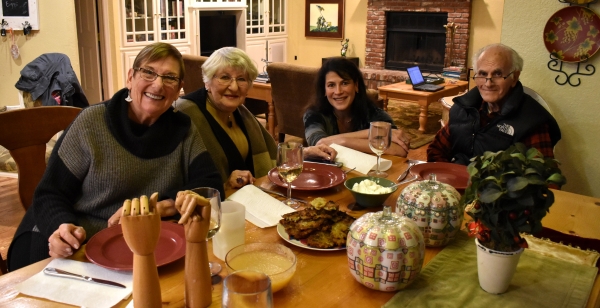 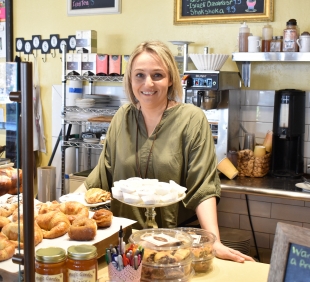 Tal Sendrovitz, owner of Tal's Patisserie in Danville, feels it's her cultural responsibility to sell jelly-filled fried doughnuts called sufganiyot, a treat found on every street corner in her native Israel during Hanukkah. (Photo by Erika Alvero)

At the heart of the Hanukkah holiday, perhaps, is oil.

Oil that burned in the Temple in Jerusalem, after the Jewish rebels known as the Maccabees reclaimed it from the Greeks in ancient times. Oil that has come to symbolize for the Jewish people light in the midst of darkness, faith that endures in the face of adversity.

And it is oil that lives on in the foods commonly consumed over the eight days of the Hanukkah celebration, especially in the fried potato pancakes (better known as "latkes") and the fried "sufganiyot" doughnuts.

"They say the Maccabees found enough oil to light the menorah in the Temple for one night but it lasted for eight nights," said Rabbi Larry Milder, who has been at Pleasanton's Congregation Beth Emek at 3400 Nevada Court for five years, and served as a rabbi for 34 years in total. "In commemoration of that, the foods that are eaten on Hanukkah are foods fried in oil. And the oil reminds us of the miracle."

This year, Hanukkah will begin sunset Tuesday and end sundown Dec. 20. In the Tri-Valley, local Jewish families will soon be gearing up for the celebration, setting out their nine-candle menorahs -- and stoking the frying pans.

Most importantly, says Nancy Lewis, a Pleasanton resident and member of Milder's congregation, it's a communal celebration.

"It's all about sharing!" said Lewis, who also is a regular contributor to the Pleasanton Weekly, compiling the Streetwise column with her daughter, Jenny Lyness.

Lewis prepares the Hanukkah meal in the exact style of her mother, who died in 2008.

"That keeps her with us," she said.

Culinary-wise, this means throwing a zucchini into the grated potato mixture before the latkes are molded and fried, a splash of green in what comes to look like "tuna salad," Lewis jokes, after the potatoes, scallions, onions, shallots, eggs and flour are mixed together. (The potato grating is not for the faint of heart: "You're not really making latkes until you have blood on your knuckles," Lewis said.)

Tradition-wise, this means that when she lights her childhood menorah, she never wipes off the purple and blue wax drippings at the base -- it's a reminder of Hanukkahs past, she says.

But that's just Lewis. There are no hard and fast rules for Hanukkah fare; some people make cauliflower latkes, some use a food processor in the latke-making process. Some like to bet on which of the eight candles of the menorah will go out first. Jane Cameron, Lewis' fellow choir singer at Beth Emek, makes sure to squeeze the latke mixture twice -- once with her hands and once with a towel, to really shake out the surprising amount of water trapped inside the potatoes.

Regardless of individual cooking preferences, the roots of the latke -- and other oily dishes of the holiday -- can be traced back to the second century B.C.E. and the Hanukkah story.

The story, said Rabbi Milder, is recorded in the Talmud, the comprehensive collection of rabbinic writings. According to the Talmud, the holy Temple in Jerusalem had been captured by the Syrian Greeks, who, seeking to impose their own religion on the Land of Israel, had defiled the Jews' place of worship. Greek idols had been placed around the temple, and the sacred oil, blessed and sealed, was destroyed.

"It was a religious persecution rather than a genocide or a killing," said Rabbi Raleigh Resnick, director of Chabad of the Tri-Valley, a Pleasanton synagogue at 3370 Hopyard Road.

But a small group of Jewish rebels, known as the Maccabees, fought the Syrian Greeks and recaptured the Temple, re-establishing their own independence. That part of the story is historical, Milder said. The legend is associated with the oil.

According to the Talmud, the Maccabees found only enough pure oil -- oil which had not been defiled by the Greeks -- to last for one night.

"The lamp burned for eight nights," Milder said. "The rabbis in the Talmud said it was a miracle that represents the victory of the Maccabees, the victory of the few over the many, the victory of a handful of people who have faith over a tyrant who sought to destroy the nation of Israel. And the first tyrant to ever try to wipe out Judaism entirely."

He noted that the rabbis who authored the Talmud were writing in the sixth century of the Common Era, at a time when the Jews had long lost their independence and country. Their message in the writings, he said, focused on the story as a symbol of faith and hope, rather than as a military victory.

"For the Maccabees, it was real political independence," Milder said. "For the rabbis, it was something more spiritual."

The story gives the holiday its name as well: "Hanukkah" -- or "Chanukah" or "Hannukah"; "I don't think you can get it wrong," joked Rabbi Resnick -- is the Hebrew word for "dedication" or "consecration." The entire celebration is about the Jewish people "re-dedicating" the Temple in Jerusalem, Resnick said.

The legend of the oil, then, is honored by the consumption of foods fried in oil. But just as Hanukkah fare and traditions shift from household to household, they vary too on a global scale, from country to country. And they've evolved, and continue to evolve with increased cultural exchanges.

Take the latke, for instance.

Before there were potato pancakes -- actually, before the potato had even arrived in Europe -- Jews in medieval Italy ate fried cheese pancakes, Milder said. The cheese has its roots in another story: a widow named Judith who defeated the Syrian Greek General Holofernes by feeding him salty cheese and wine. After he got drunk and fell asleep, she killed him, according to the Book of Judith.

Olive oil was readily available in Italy, but not so accessible to Eastern European Jews, Milder said, who used chicken or duck fat in its stead. Fried cheese pancakes posed a problem for them, though -- frying cheese in animal fat defies kosher rules that prohibit mixing meat and dairy products.

"So they had to use something else," Milder said. "And by the late Middle Ages, potatoes had arrived in Europe, and were very popular. And that provided a good substitute for the cheese. So they lost the symbolism of the cheese, but they retained the symbolism of something fried. And it's Eastern Europe that gives us the potato latke, which Americans associate with Hanukkah, because most American Jews have their roots in Eastern European Jewish communities."

Latkes may be a Hanukkah standard here, but in Israel, said Tal Sendrovitz, a transplant who owns a bakery in Danville at 304 Sycamore Valley Road, it's all about the sufganiyot -- fried doughnuts with jelly inside.

"If you walk in Israel during Hanukkah, first of all you smell all the frying, because all bakeries and all the markets and all the grocery stores, they all fry sufganiyot," she said. "That's what you do."

Sendrovitz moved to the United States 30 years ago, and opened Tal's Patisserie five years ago. Baking and entertaining were always her passion, and she missed the "bakery culture" of her homeland.

"People stop and drink coffee or tea in ceramics with something good next to it, like a tasty baked good," she said. "There's no culture like that here. It's very European, very Israeli. I was trying to create what I was craving."

At Tal's Patisserie, she sells a mix of her favorite baked goods -- from Eastern European-style crepes to Middle Eastern bourekas, stuffed pastries with phyllo dough on the outside -- an eclectic, multi-cultural collection that is in a sense reflective of contemporary Israeli cuisine.

Sendrovitz usually doesn't serve fried foods, but around this time of year, she makes sufganiyot. They're not your typical "American doughnut" with a hole in the center, she said, but rather a ball of dough with jelly filling -- though fancy sufganiyots may be filled with dulce de leche or Nutella. But she grew up with the jelly, she said.

"I felt an obligation to my Jewish culture here," she said. "Because there's no place around here where you can actually buy sufganiyot...I don't think the Jewish people that were brought up here feel the void so much, but anybody that came from Israel, anybody that has a strong connection to Israel, does feel the void. Because I know I felt it."

Both Rabbis Milder and Resnick agree that food is essential to tradition and religion.

"Food has a way of bringing people together," Resnick said. There should not be, he said, "a dichotomy of the spiritual and the material," but rather, he said, we should use food and the "world gifts that God has given us" to make the holidays meaningful.

"Judaism is a civilization," Milder said. "It's a whole lifestyle. And a lifestyle includes rituals but also culture, tradition, folklore, and food of course is something that both brings us together in families to celebrate our holidays. And also gives us reasons for re-telling stories. You serve latkes -- everybody knows the story of Hanukkah, because the latkes are a vehicle for re-telling the story."

What a lovely article. Beautifully written and so informative!

What a lovely article about Traditions of our Jewish community in Pleasanton.
I always believed that if people could share foods together, sharing the similarities of foods in the their cultures, we could have peace in the world.

This was an absolutely wonderful article. Kudos to the Weekly.

Click the "Install" tab and also the download will certainly begin immediately. Web Link You have actually effectively finished the installment of Acmarket For Android.

The first few seconds after awakening; before I remember the virus
By Chandrama Anderson | 0 comments | 3,643 views

Be aware of hyperbole in numbers and media hype
By Tim Hunt | 14 comments | 1,581 views