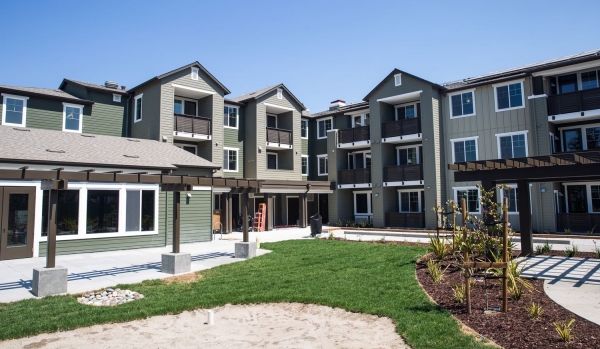 The new multi-story building at Kottinger Gardens, part of the first phase of the redevelopment project, is slated for completion in October. (Photo by Daniel Kim) 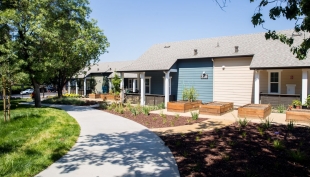 Bordering an expanse of green grass that makes up Kottinger Village Park, the new homes sit side by side, painted in earth tones and adorned with decorations.

And behind construction fencing, a new multiple-story building nears completion, with tenants expected to move in this fall.

Years in the making, the Kottinger Gardens affordable senior housing project is now toward the end of its first phase. The redevelopment of the former Kottinger Place site and current Pleasanton Gardens complex -- respectively located at 240 and 251 Kottinger Drive, just outside downtown Pleasanton -- is a collaboration between the city and nonprofit developer MidPen Housing Corp.

"It's been a pleasure to partner with the city of Pleasanton and other community stakeholders on their clear vision to transform this wonderfully situated but outdated property," Abby Goldware, MidPen associate director of housing development, said in a statement. "The seniors who lived here previously now have brand-new, environmentally friendly homes where they can age in place."

"And once the second phase is complete, we'll have doubled the number of affordable apartments, which is particularly important given the growing population of seniors here in one of the nation's most expensive housing markets," she added.

A task force made up of local commissioners, residents of the senior housing communities and other stakeholders selected MidPen for the two-phase project in December 2011. As part of the project agreement, the city retained ownership of the former Kottinger Place property while MidPen committed to owning and managing the new buildings themselves.

The first phase of construction began at the old Kottinger Place in March 2016 and consists of tearing down 50 units and building 131 new ones split between 51 single-story one-bedroom cottages and a multi-story building with 76 one-bedroom apartments and four two-bedroom units.

Former Kottinger Place residents were moved to temporary housing or stayed with relatives for a year until construction on the cottages was completed in March. Construction on the multi-story residential building, which will also house property management offices and a community room, is expected to be wrapped up in October.

The second phase -- the redevelopment of the Pleasanton Gardens site across the street -- is slated to start in December and finish in April 2019. MidPen will expand that property from 40 units to 54 split between 24 one-bedroom cottages and a multi-story building with 26 one-bedroom apartments and four two-bedroom units. Current tenants will move to the Kottinger Gardens phase one property across the street while construction takes place.

The Kottinger Gardens complex is more than a decade in the making.

In response to a request from the Housing Commission and a group of residents, the city began studying the potential for the replacement, expansion and/or renovation of Kottinger Place and Pleasanton Gardens in November 2003. The City Council in 2004 approved the formation of a Kottinger Place Task Force to bring public input into the planning process and make recommendations for the future redevelopment.

In 2010, the council adopted an agreement for the study of a Kottinger Place and Pleasanton Gardens development. Two years later they approved an exclusive negotiating rights agreement with MidPen to lead a pre-development process that would identify the steps needed to move forward. By the end of 2012, the task force was working on the site planning process with MidPen, which continued through the end of 2013.

The City Council approved an overall plan for the project in May 2014.

The project is significant, assistant city manager Brian Dolan said, because "there's a huge need for this kind of housing."

"I think we could build several more of these and there would still be some people that weren't served, but we have the resources to do this one so we're concentrating on this one," Dolan said. "The senior low-income demographic has been identified by the city as a population with a specialized need for housing, so we're very happy to be able to provide something for that group."

Funding sources for the project, which costs roughly $72.2 million, include the city of Pleasanton and county of Alameda; the Housing Authority of the County of Alameda, the U.S. Department of Housing and Urban Development, the California Tax Credit Allocation Committee, and a permanent loan and equity from Union Bank.

Eighty-one of the 185 new units have Section 8 subsidies, which allows the rent for each household to be calculated based on 30% of the household's income. The rent in the one-bedroom units ranges from $548 per month to $1,097, while two-bedroom units cost between $658 and $1,097 monthly.

Kottinger Gardens will ultimately house a mix of longtime and new senior residents earning up to 60% of the area median income, or $50,100 for a two-person household. MidPen received 912 applications for 47 openings for new households at phase one and conducted a lottery last month.

On a recent tour of Kottinger Gardens phase one, Goldware said the redevelopment project is a response to the needs of the residents and demand for affordable senior housing.

"We knew there were long waitlists and not a lot of turnover, so we wanted to maximize the units while maintaining the character of the neighborhood and site," Goldware said.

To that end, MidPen representatives met with each household individually to get a sense of what they wanted in a new home.

"One of the things we heard over and over was about being able to age in place and being able to live independently as long as possible," Goldware said.

They also heard that some residents wanted the option of living in a single-story cottage or multi-story building.

Bill Simpson, 85, lived at Kottinger Place from 2004 until he had to relocate for construction in 2016. He and his cat Olivia now reside in one of the new Kottinger Gardens cottages.

Simpson was on the Kottinger Place Task Force that worked with MidPen on the design of the new housing.

"I liked it very much (at Kottinger Place)," Simpson said in a recent interview in his home. "I had mixed feelings (about the project), but I'm very pleased at the outcome."

Simpson added he likes living in a cottage as he did before, particularly one that now has improved insulation and a wraparound porch overlooking Kottinger Village Park.

Accessibility has been a key consideration of the redevelopment. Units feature shelves that pull out and larger bathrooms for seniors in wheelchairs, with bars installed and seat attachments for the bathtubs.

MidPen is also building with the environment in mind. All buildings will be fully insulated, with double-paned windows, energy-efficient lights and drought-tolerant landscaping.

Right now the focus is on wrapping up the first phase of the Kottinger Gardens project this fall. In the multi-story building, Goldware pointed out what will be the community room, the fitness room and a lounge, spaces where MidPen will offer classes and services for residents. Right outside, seniors will be able to play bocce ball or watch the activity from rocking chairs.

"It will be really nice once this fencing can come down," Goldware said.

sabina is a registered user.

Once again Pleasanton shows what a great job it does in supporting seniors.

Great project, glad to see it's finally able to serve these seniors. That said, it's taken over 14 years to get just the first phase built. I'm sure council and staff will all be patting themselves on the back for accomplishing this but they should be embarrassed that it took so long.

Repairing a Disagreement with your Beloved & “Physical” vs. “Social” Distancing
By Chandrama Anderson | 0 comments | 1,072 views