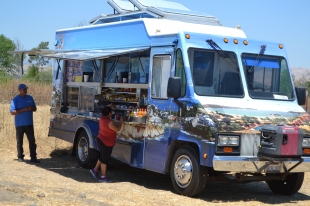 Thank you for providing more details to a story that was taking on a life of its own. While it may be true that the truck has been using this locations for many years the location is not what it was 1 year ago or 5 years and not what it will be in 1 year.
This has become a busier intersection with many near car accidents. The concerns for private property rights have their place but this was clearly a safety issue - and not a case of any type of discrimination.
I applaud the owners of the property to offer the truck a location to conduct their business - knowing the risk they are taking on by having this business relocate to their property. I trust all the "concerned" citizens come out and support both the truck and Casa Real and stop looking for (or making up) the negatives.
Good luck to both.


Amazing what a little bad press about a winery will accomplish, poke the hornets nest and solutions are found, especially since according to the above article all the employees at the winery patronize that food truck now and nobody wants to see them leave. Thank you to whoever saw the "light".