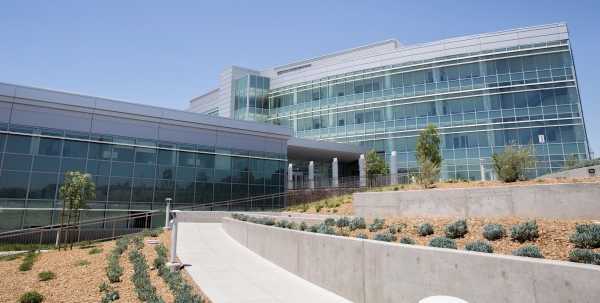 The new East County Hall of Justice in Dublin marks a re-organization of the Alameda County Superior Court system, as particular types of cases will be consolidated in specific locations. Officials hope the courthouse's close proximity to the Santa Rita Jail will make arraignments and trials more efficient as well. (Photo by Daniel Kim) 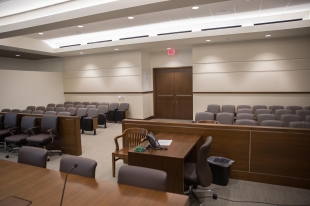 The new courthouse houses 13 courtrooms, estimated to see about 3,000 criminal and 54,000 traffic cases per year. (Photo by Daniel Kim)

The courthouse -- dubbed by frequent users as ECHOJ (pronounced "echo-jay") -- is a five-story, 146,000-square-foot building, plastered with turquoise windows looking out over the city. It's located on an expansive parcel of land at 5151 Gleason Drive, Dublin, right down the street from the Santa Rita Jail.

Officials estimate the new courthouse will see about 3,000 criminal and 54,000 traffic cases per year. And more importantly for the superior court, the building's opening last month marks a consolidation and reorganization of courtrooms countywide.

The new courthouse is LEED silver certified, a designation assigned based on environmental and sustainable design. It contains 13 courtrooms, jury deliberation and waiting rooms and attorney/client conference rooms. Trial schedules are posted for viewing on screens in cavernous hallways, and the elevators' walls feature wavy designs that are intended to disguise potential graffiti.

"This is really unique in that you have a county building and a state building side-by-side, sharing a function," assistant district attorney Ken Ryken said.

District Attorney Nancy O'Malley said their offices were constructed purposefully, with the people they serve in mind: "We built our space in the new Dublin courthouse to accommodate the victims, children and witnesses who come to see us."

Right now, the courthouse is a bit "in flux" operationally, according to Judge Jacob Blea III, who serves in the arraignment department, the first step in a criminal court case in which a defendant is informed about the charges against them and asked to enter a plea.

The judge said it took him only a few days to completely settle into his new chambers, and his walls are already adorned with photos of his family, basketball and baseball figurines and other sports memorabilia.

Blea has spent 20 years on the bench, bouncing around somewhat between courthouses as Alameda County judges are wont to do.

"You can ask where you'd like to go, but it doesn't always happen necessarily," he said.

He likes how the new courthouse consolidates the various departments. Previously, a felony case might be initially arraigned in Pleasanton, and then travel to Hayward or Oakland after preliminary hearings. But now, a criminal case can see completion from beginning to end, all within the confines of ECHOJ.

"To have a case here where it can be arraigned, pre-tried, PX (preliminary hearing), trial, all in the same building, I think makes a lot of sense from the court's standpoint," Blea said.

At the project's essence is a reorganization of the Alameda County Superior Court system.

At one point, Blea said, most of the courts around the county were "a hub for everything." The county used to have both municipal and superior courts, with municipal courts in Pleasanton, Fremont and Berkeley handling misdemeanors and civil cases up to $25,000.

"Then we consolidated and so that got confusing," Blea said. "And the courts started branching off into bigger stuff."

Now, there are specific places to go for particular types of cases. Hayward will be a civil courthouse -- hearing family law cases and a variety of civil litigation, but no criminal suits. Fremont and Oakland's Wiley W. Manuel will be misdemeanor courthouses, while the Rene C. Davidson courthouse, also in Oakland, will be for felony trials.

Traffic cases will be heard in Berkeley, Hayward, Oakland and Dublin.

And so now, ECHOJ will hear felony and traffic cases. The first juries are set to be called by early August, said Donna Linton, who served as the superior court's representative on the ECHOJ project team.

The lease for the former Pleasanton courthouse, the Gale-Schenone Hall of Justice -- which began in 1987 and cost $903,000 a year -- will be terminated by the end of October, allowing for move-out time. Cost-cutting measures aside, moving out of this location is a welcome relief for court officials and neighbors of the rented courthouse at 5672 Stoneridge Drive, considering that the courtrooms were situated in the midst of a business park.

The building's landlord and other tenants also had expressed concerns about sharing the space with in-custody defendants, according to Finke.

He said residents of East County would benefit too by having "a new, modern building where they can deal with their traffic tickets."

The final product is the culmination of a prolonged, arduous process.

The idea was first conceived in the mid-90s, in response to the growing population of east Alameda County and to the opening of the Santa Rita Jail in 1989.

"The seat of the justice system and the county as a whole had always been Oakland," Ryken said. "But there was some vision that this would be the area of growth for the county."

In 2003, an environmental impact report for the project was drafted and circulated for public review and comment. But after that, progress stalled, as the price of concrete and steel continued to escalate, Ryken said, and "it kept getting priced out of a reasonable economic decision."

A turning point came in 2008, with the passage of Senate Bill 1407, which allowed certain projects in development to continue to be funded through the State Court Facilities Construction Fund, rather than having that money transferred into the general fund.

This motion saved the courthouse's funding, and served as a sort of catalyst for construction, according to Ryken.

"The court funding bill that would have swept all those funds back to the general fund was really a 'use it or lose it' moment," Ryken said. "You have funding you've been saving for this, it's in your account, it's going to get swept back into the general fund if you are not committed to build this."

After negotiations between court officials and the county, the project finally broke ground in September 2014.

Being situated so close to the Santa Rita Jail will be beneficial to both inmates and the judicial department, Finke said.

"Having the courthouse literally directly across the street from the jail, it's going to be a tremendous cost-saving for us and probably the sheriff," Finke said, pointing to transportation costs and traffic delays when defendants have to travel for arraignments. Costs are important, he said, considering that court funding has seen dramatic cuts in recent years -- in fiscal year 2007-08, the general fund funding level was about $124 million, while in FY 2017-18, it will be about $76 million.

The close jail proximity is also good for defendants, Finke said, who won't have to get "up at 3 in the morning and spend all these hours on a crowded bus coming to Oakland and going back." A shuttle service will connect the jail to the courthouse.

"The volume and strain which is placed on this building is unmanageable," Woods said, pointing to cases in the past weeks that had to be moved to the following day.

He also believes that the move puts an unfair burden on north county family members who want to be present for a loved one's arraignment. The presence of family members is critical, Woods said, in terms of the emotional support and being able to provide supporting evidence.

"It adds the hardship of making all these families from the north part of the county, or even further, having to drive out to arraignments, first appearance, in Dublin," he said. "It's a really, really terrible idea."

And Woods is critical of the argument that ECHOJ's proximity to the Santa Rita Jail will save costs, he said, since many of the proceedings after initial arraignments will still be tried in other locations. "Those buses are still running to Oakland every day," he said. "They just may not be as full, but they're still running the buses to Oakland."

Presiding Judge Jacobson agrees that it would be good for Oakland residents to have their arraignments held in Oakland. But, in line with state law, he said it's most important to have inmates arraigned as close to their detention center as possible. Two or three times a week, Jacobson said, something happens in-transit from Dublin to Oakland that delays arraignment proceedings and leads to overtime costs.

Additionally, one of the main problems he sees is that the local Oakland jail -- the Glenn E. Dyer Detention Facility -- takes in few local inmates, instead housing mostly federal detainees. If more space were available there, he said, then local inmates wouldn't be held at Santa Rita, but rather in Oakland, where they could be arraigned at the Wiley W. Manuel courthouse a block away.

Time will tell how the new courthouse, which has been in use only a month since opening the week of June 26, will truly function and the impact it will have on those who frequent it.

"A lot of the people who walk in the courthouse doors are not always that happy to be there," Finke said. "So I think having a nice, new modern, well-designed space for them to be in -- maybe it will help them."

The first few seconds after awakening; before I remember the virus
By Chandrama Anderson | 0 comments | 3,626 views

Be aware of hyperbole in numbers and media hype
By Tim Hunt | 14 comments | 1,572 views