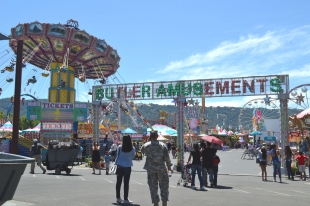 The 2017 Alameda County Fair opens this Friday and runs through July 9 at the fairgrounds in Pleasanton. (File photo)

The fair is my New Years. A time to have fun and reflect on the year that has gone by, and those years that have gone before. New good times, and remembering good times with friends who are no longer with us. Living in Pleasanton, the fair becomes that point of reference. I just love it.

While the fair may bring entertainment and some revenue to the city it is well beyond time that the fair be required to pay for the cost of overtime for the PPD to deal with the issues. Those of us who live near the fair deal not only with the noise but with the selfish and abundantly stupid attendees who think nothing of parking illegally and blocking our driveways. We have to deal with the low life's who hang around the fair well after closing and the police deal with all of the extra calls for service. My yard gets trashed and our lives disrupted for the duration. Yes, I knew about the fair when I bought my home. I am not asking for it to go away, only that the fair pay what it costs us to police those who do not have the brains or the manners to do the right thing.