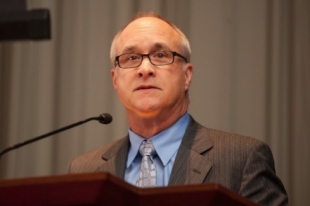 Eric Thiel, who taught science at Pleasanton high schools for over 30 years, died Saturday from an unspecified medical issue.

Eric Thiel, a science teacher at Amador Valley High School who had been with the Pleasanton school district since 1985, died Saturday from an unspecified medical issue.

Thiel had just retired from teaching after a nearly four-decade career, with Friday serving as his last day at Amador, district spokesman Patrick Gannon said. He was 65 years old.

"Our hearts go out to the Amador Valley High School community, Eric's family, and to all those who knew and loved him over his incredible 38-year teaching career," Gannon said Monday. "Eric reminded us that great educators are not just teachers; they are also leaders, mentors and friends to their students and fellow colleagues."

Thiel had taught at Amador since 1992. He joined PUSD in 1985 as a teacher at Foothill High until moving over to Amador.

In 2014, Thiel was recognized as Claes Nobel Educator of the Year by the National Society of High School Scholars, which presents the award to the "best of the best," according to NSHSS.

Thiel was responsible for starting the district's AP Biology program as well as co-creating the "Project Creek Watch" program, NSHSS officials said in an announcement about their recognition.

He received numerous accolades over the years, including PUSD Teacher of the Year, the PTA Excellence in Education Award and the Bank of America Local Hero Award.

"Exciting students about biology is my ultimate goal and if I can do that while adequately preparing them for state and national exams, then and only then do I have some sense of accomplishment," Thiel told the NSHSS three years ago. "Increasing numbers of students selecting biology as their major accompanied by email messages from past students currently in college thanking me for properly preparing them is the greatest reward."

Gannon said that Amador staff had a get-together Sunday night to support one another, and counseling was offered for students and staff at the school Monday. Friday was the last day of the school year, and Thiel attended the school's graduation that evening.

"Please keep our Amador community, and Eric's family and friends, in your thoughts," he added.

A GoFundMe has been set up to raise funds for Thiel's family. It had raised nearly $22,000 as of Monday afternoon.

This is the second time a PUSD teacher has died in the past two months. Carla Boerman, a Pleasanton Middle School English teacher, was killed in a car crash in Pleasanton on April 4.

So very sorry to hear of this wonderful teacher's passing. I had the pleasure of attending his class while he taught at Foothill in 1987 and enjoyed his class immensely. In fact it was just last week I took my kids on a bike ride around the neighborhood and stopped off at Foothill and showed them the classroom where Mr. Thiel taught me many years ago - just that one classroom. My thoughts and prayers go out to his wife and children.

Kurt Kummer is a registered user.


This is such sad news. My thoughts and prayers go out to Eric's family and to all of his former students. He was the guy to go to if you wanted to know what was going on 'down at the creek.' Pleasanton will miss you Eric.

10 people like this
Posted by Jocelyn (Yonker) Vizzusi
a resident of Amador Valley High School
on Jun 6, 2017 at 6:58 am

I was an AVHS graduate of 2000. Although I never had the pleasure of being in his class, I knew his name from friends and I knew that he was a coveted teacher! This is very sad news, and I am sorry for his family's loss. Rest in peace.

Report Objectionable Content
Email Town Square Moderator
3 people like this
Posted by The Panhandler
a resident of Las Positas
on Jun 6, 2017 at 9:00 am

In shock. What a great example of leadership he was. Such a great human being. My condolences, my heart needs repair.

Report Objectionable Content
Email Town Square Moderator
4 people like this
Posted by Scarlet
a resident of Valley Trails
on Jun 6, 2017 at 11:06 am

RIP Mr.Thiel !! He was an incredibly fun and kind teacher ! I had the pleasure of being in his biology class @ Foothill in 1991 -

What I Remember about Mr. Thiel,

I can honestly say, I don't remember a lot about the subject matter. It's funny though, this past school year, I was reviewing paperwork with my 14 year old son for an upcoming science test, and I was surprised at how much I remembered about plants, and amazed at how much we have learned in the intervening years. DNA wasn't even mentioned when I had science class.

In reading the comments others have left, I can only imagine how excited Mr Thiel must have been with the knowledge humanity has gained in leaps and bounds over the last 30 years. I would be willing to bet that each new school year offered him so many more options in sharing new information with his students and I am certain, this only added to his enthusiasm.

I am not at all surprised that he took his work outside of the classroom and into the community.

I am deeply saddened to learn, after all the time he gave to others, he has been robbed of the opportunity to share his time more freely with his loved ones upon retiring.

I can only hope that learning of the impact he had on so many lives brings some measure of comfort to his family.

I confer many, many kudos to the student who picked him to visit the White House and meet President Obama. I cannot think of a more deserving person to share in such an honor.

I can't really put into words how I feel about this tragedy and tears don't fit on a computer screen.

I can only say that Mr Thiel was one of kind, my heart goes out to his family & friends, he will be sorely missed by so many. Humanity needs people like him, and his loss is a loss to us all.

RIP Mr Thiel - I hope someone with as much humor and compassion will step in to pick up where you left off........

Report Objectionable Content
Email Town Square Moderator
4 people like this
Posted by Chris Peters
a resident of Pleasanton Heights
on Jun 6, 2017 at 8:00 pm

Deepest sympathy and prayers for his family. Both of our boys had him for Biology and AP Biology at AVHS. He was inspirational and did a great job of preparing our boys for college level science.

Report Objectionable Content
Email Town Square Moderator
7 people like this
Posted by Mark Schmitt
a resident of another community
on Jun 7, 2017 at 6:12 am

Eric and I grew up together in the Oakland Hills and were best of friends thru school. I always knew he was a special individual destined to make a positive difference in society. I am saddened by his death and the fact that we grew apart and lived our lives out without maintain our friendship. RIP good buddy and see you again down the road!

Report Objectionable Content
Email Town Square Moderator
4 people like this
Posted by Jim brandes
a resident of Del Prado
on Jun 9, 2017 at 10:38 pm

I was at Foothill in the late 80's. Eric was truly the best of the best. I was his guinea pig and did an independent study AP bio class with him as an elective as the only student. I was his TA and helped him set up his grades on Excel.
I played gin rummy with him as a TA as a senior, and rarely won. I was a biology major in college. My niece has him as a teacher as well and she is now a biology teacher herself. No teacher in my life had the impact on my life as he had, and I hope his family knows how much he positively affected the world thru his teaching and inspiring so many students

The Impact of COVID-19 on Our High School Juniors and Seniors
By Elizabeth LaScala | 0 comments | 1,840 views