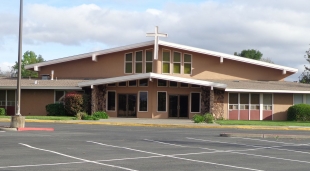 Evangelical Free Church of Pleasanton would be torn down and its 9-acre site developed with 36 new single family homes in the Valley Trails community if City Council approves. (Photo by Jeb Bing)

9 people like this
Posted by Park user
a resident of Another Pleasanton neighborhood
on Apr 27, 2017 at 4:44 pm

Thank goodness for finally a good project for this land! Having a restroom there will be great too for the Valley Trails neighbors. Will it have water fountains like the restroom at Stoneridge Creek Park restroom? If so, that is a nice addition to the neighborhood, and would cost the city upwards of $500,000 to construct based on the cost of past restrooms.

I'm hoping that the city council will not also have an hours long debate on the pros and cons of a restroom.

There's not going to be any foundation issues with the these new homes are there? That's the first thing I would be asking if I were a homebuyer looking to buy into one of the new homes in that area. Are there new construction techniques so that that is not a problem anymore?

Ponderosa scores again, on to the next church!!! That's 2 churches in the last 2 years cashing out with ponderosa. Better make sure those new homes have a good foundation warranties or the new owners have really good lawyers.

Report Objectionable Content
Email Town Square Moderator
5 people like this
Posted by Herb
a resident of Golden Eagle
on Apr 27, 2017 at 5:43 pm

I can't say that I'm sad to see a change. I've had some nice walks with my dog down the Valley Trails park path and then suddenly saw the unkempt grasses, tall weeds, and dirt of the big church owned field next to the park. Often wished that the church would just sell the land if they're unable to properly take care of it. Sure that I'm not the only one who has thought that.

Report Objectionable Content
Email Town Square Moderator
3 people like this
Posted by Sue
a resident of Happy Valley
on Apr 28, 2017 at 9:43 am

Nancy Allen.....not having a restroom at a park would create a new set of problems ! ! ! An absolute necessity ! ! !

Report Objectionable Content
Email Town Square Moderator
4 people like this
Posted by Perry Mason
a resident of Castlewood
on Apr 28, 2017 at 11:15 am

I think this is a great project for the neighborhood and the city as a whole.

Just a quick question: Where was all this 'concern' regarding cost, from Commissioners Allen and O'Connor when they supported new dog parks in the city. Which by-the-way require quite a bit of on-going service and maintenance by the city and not everyone has a dog!

Amazing, that, because folks prefer to utilize indoor plumbing in 2017, these two Commissioners are 'concerned'. You should be more concerned that you both made fools of yourselves at the hearing. I am convinced you just like the sound of your own voice (newsflash: not everyone enjoys it). Please re-focus on why you are there and what a Commissioner is supposed to be concerned with.

My gosh, what a deal for the city: new FREE building, FREE land, ZERO operational costs for the first 5 years. What am I missing? Oh yeah... NOTHING!!!

Report Objectionable Content
Email Town Square Moderator
15 people like this
Posted by Neighbor
a resident of Valley Trails
on Apr 28, 2017 at 12:17 pm

Nimby, Nimby, Nimby, every neighbor for themselves! As long as you got your enticements to heck with everyone else! Kids lose boohoo!

Report Objectionable Content
Email Town Square Moderator
7 people like this
Posted by Not A Waste Of Money
a resident of Pleasanton Valley
on Apr 28, 2017 at 12:27 pm

There is a concern about cost related to this project? Where was the concern about cost when the neighbors around the "tennis park" demanded that the city change plans for a tennis court that was being placed where it was supposed to be placed per the original site plan?

Valley Trails deserves an upgrade to their park much more than the people who didn't bother to understand the plans for the tennis park when they moved next to it and demanded costly changes once the city moved forward as planned.

Isotope is a registered user.


"Valley Trails deserves an upgrade to their park"