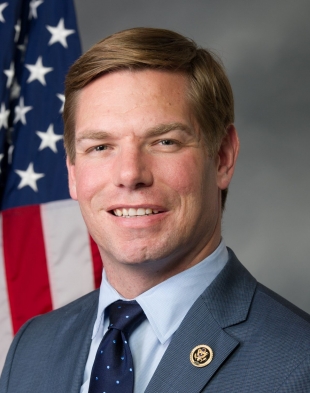 21 people like this
Posted by PleasantonTaxpayer
a resident of Highland Oaks
on Dec 8, 2016 at 9:34 am

Looks like towing the line for Obama and Pelosi these past few years is finally starting to pay off for Congressman Swalwell.

How courageous, Pleasanton Taxpayer, implying something negative about Swalwell but not including anything specific by way of content and then not even using your own name.


Swalwell voted no against Kate's Law.
Swalwell has moved so far to the left, Pelosi carries him around in her purse.

Report Objectionable Content
Email Town Square Moderator
10 people like this
Posted by Roberta Lewis
a resident of Another Pleasanton neighborhood
on Dec 9, 2016 at 6:48 pm

Congratulations Congressman Swalwell. Proud to be a supporter!! Keep up the good work. We need you now more than ever!

Report Objectionable Content
Email Town Square Moderator
7 people like this
Posted by Pete
a resident of Downtown
on Dec 10, 2016 at 2:46 pm

Seriously? I always thought he was a joke and lacked backbone and would not stand with Kate. I have zero respect for the guy.

Report Objectionable Content
Email Town Square Moderator
6 people like this
Posted by Map
a resident of Del Prado
on Dec 11, 2016 at 9:35 am

Wasn't this the same guy trying to forgive government backed student loans for just certain groups of former students and not for everybody?? If you are offering free rides then everybody gets that free ride, you can't pick and choose on who is going to be irresponsible

How to Make General Education Requirements Work for You!
By Elizabeth LaScala | 4 comments | 690 views