Head of the Class: Williams makes the move at Amador | News | PleasantonWeekly.com |

Head of the Class: Williams makes the move at Amador 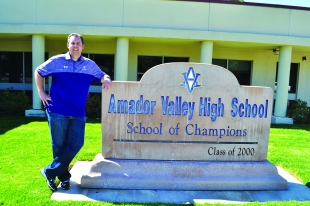 Mike Williams was appointed the new Amador Valley High School principal in the spring following two years there as a vice principal. (Photo by Julia Reis)

Over the last decade, Mike Williams' career has taken him from the blacktops and gymnasiums where he taught children physical education to the principal's chair at Amador Valley High School all the while staying in the Bay Area, where he was born and raised.

Williams grew up in San Carlos and saw his passion for teaching start to take hold as a high school senior tutoring peers to fulfill a community service requirement.

"I remember helping explain a basic problem, and to see the look on their face when they realized they finally understood it, and I was the one helping them through it, it triggered, 'This is such a great feeling, I enjoy this,'" Williams, who is in his 30s, said. "That started my thought process about going into education."

That thought process has culminated with Williams' appointment to the top post at Amador Valley High in the spring. Then a vice principal at Amador, Williams served as interim principal for the last two months of the 2015-16 school year before formally taking over July 1. Williams replaced Tom Drescher, who left for another job.

Once Williams realized his interest in pursuing a career in education, he enrolled at Chico State University, where he gained more inspiration for becoming a teacher.

"When I was in college I took an art history course, and it wasn't truly a class I was excited to sign up for at the time," Williams said. "But after experiencing the class and the teacher and the passion, it just made it very clear that was my calling. I knew I wanted to work with students and I wanted to help."

After getting his bachelor's degree, Williams returned to the Bay Area to teach in the county he grew up in. He spent several years teaching physical education at Peninsula schools and along the way obtained his master's degree in educational management and administrative credential from San Francisco State University.

The job offer prompted Williams' family to make the move to Livermore, closer to Williams' brother, an aunt and uncle and other relatives.

"That was the one challenge of coming out here the only thing I ever knew as far as my home was all in San Carlos," Williams said. "We sold our house, my mom sold her house that she's owned for 37-plus years and moved over here. It was a big family transition so we could set roots here."

Now Williams' latest transition is into the role of Amador's head administrator. One of the challenges he says he has faced initially has been that 25 teachers about a fifth of the staff are new to the school this year. That's meant ensuring they all have the support they need so they'll eventually become "long-term veterans," Williams said.

The teachers at Amador are just a part of what Williams has grown to appreciate about the school.

"The overall desire of students to succeed, the commitment of teachers to provide the best possible education for students," Williams said when asked what appealed to him about being principal. "It's a very comfortable place to be because the staff here makes you feel welcome."

When Williams isn't at the school, he said he enjoys spending time with family, including his wife and two young children, and going to concerts and sporting events.

For the record, I think principals should have absolute power to hire and fire school employees. The district would be MUCH better for it.

Let's give principals the power to fire all of our teachers! Oh wait... we have a teacher shortage. I can't figure out why intelligent people don't want to leave their current careers to become PUSD teachers!!!!

Unfortunately, Mike Williams is not off to a great start. Already issues with some of AV's best teacher / leaders. We are in desperate need of a strong educational leader!

Report Objectionable Content
Email Town Square Moderator
2 people like this
Posted by AV mess
a resident of Amador Valley High School
on Oct 18, 2016 at 9:55 am

Hopefully Williams can fire or remove all the lousy Science and Math teachers that roam the halls at Amador. Whoever heard of Chemistry teachers that just sit at their desk and have their students replicate drawings day to day?

Let's hope Williams can clean up this mess.

9% of Asian students at Amador could not meet the CA math standards and scored much better than the other ethnicity groups. That's because most of them can meet the standards because many are privately tutored by one or more of the three dozen tutoring centers in town.

Google the results yourself Web Link then click on the Search Smarter Balance Results to see the dismal scores.

Maybe the posting right above this one is from one of those teachers that is actually being told by Williams they have to actually teach at Amador.

Drescher left Amador a mess. He was divisive and dishonest. Williams is doing a wonderful job; he's eliminated favoritism and leads the staff with integrity. There have certainly been bumps in the road, but we need to give him a chance and let him do his job.

The Impact of COVID-19 on Our High School Juniors and Seniors
By Elizabeth LaScala | 0 comments | 1,840 views