Review: 'The Other Woman' | News | PleasantonWeekly.com |

Review: 'The Other Woman'

One and a half stars 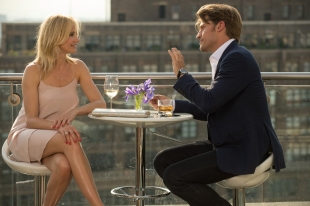 Carly Whitten (Cameron Diaz) is one of the other women in 'The Other Woman.' Photo by Barry Wetcher. Courtesy Twentieth Century Fox Film Corporation.

The women in "The Other Woman" get the equal opportunity, like the men in Judd Apatow movies, to behave like overgrown children, but the power they give their cheatin' man to occupy all their waking hours makes this comedy more sad than funny.

I can't speak for the women in my life, but I suspect they would be offended by the ones depicted in "The Other Woman."

On the one hand, they get the equal opportunity, like the men in Judd Apatow movies, to behave like overgrown children, but the power they give their cheatin' man to occupy all their waking hours makes this comedy more sad than funny. If this is girl power, we're experiencing rolling blackouts.

Cameron Diaz plays Carly Whitten, a high-powered Manhattan lawyer used to serial dating more than one man at a time (though, yes, she proclaims,

"I'm too old for this [expletive deleted"). So it's a pleasant surprise for her that she's lasted two months with her latest beau, investment whiz Mark King (Nikolaj Coster-Waldau of "Game of Thrones").

"You never use their names!" marvels Carly's administrative assistant Lydia (Nicki Minaj). But Carly's optimism comes crashing down when she makes a surprise visit to Mark's Connecticut house and meets his wife, Kate (Leslie Mann).

Mann commits big-time to her character's emotional feebleness and pathetic dependency on her man; for a while, it even appears "The Other Woman" may turn into a stalker comedy along the lines of her 1996 outing (directed by husband Apatow) "The Cable Guy," since Kate shows up at Carly's office, then follows her home, desperate for details and emotional support.

But before you can say "The First Wives Club," the duo bond and begin working together to perpetuate respective charades with Mark as they plot their next moves.

And there's where the movie definitively departs from our reality. It's hard to willingly suspend disbelief for this distasteful plot, and even harder when Diaz doesn't act like someone who's achieved her professional status (plus, her job responsibilities evaporate early on), Kate and Mark make such an incredible personality match (she's dotty and babbling; he has no patience), and Kate remains attracted to this demonstrable cad with an ever-wandering eye, even when a second mistress turns up in the form of jiggly Amber (Kate Upton).

Some won't care that "The Other Woman" doesn't pass the smell test, and depending on their taste in comedy, some might find the movie uproarious. Mann certainly works it, and gets the odd line that's funny on its own merits, and there's plenty of cheap farce and slapstick humiliations (first for the gals, then for the guy) to fill out this big-screen sitcom.

But by the time we're into the pandering pranking phase (you'll never guess ... laxatives are involved!), discriminating audiences will be looking to the exits.

These sisters may be doing it for themselves, but something tells me director Nick Cassavetes's dad John -- known for giving Gena Rowlands fascinating female roles -- would take pause at this one.

we totally enjoyed the movie...devoured my the buttered popcorn and munched on a very tasty burrito!

i luv movies about married couples and all the sneaky stuff that happens in their marriages. waaaaaaaaaay funny!

after the movie we all went out for ice-cream and talked about everybody that we know that has a troubled marriage...tee hee

marriage is not worth it...i rest my case

Repairing a Disagreement with your Beloved & “Physical” vs. “Social” Distancing
By Chandrama Anderson | 1 comment | 1,965 views