Board, district remain mum on what led to replacement 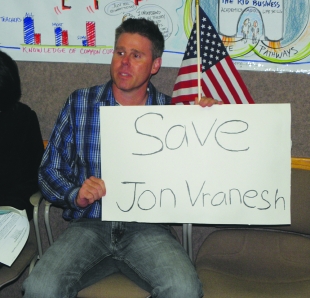 This sign bearer was one of about 20 people who came to the school board meeting in support of Jon Vranesh, who's been replaced as Walnut Grove principal. Photo by Glenn Wohltmann.

I watched the board meeting the other night and I never thought I would say this, but because of this mess and others, the board needs to put Casey back as interim superintendent and search for another superintendent. I watched:

-- People in the public given only 60 seconds to speak
-- Sessions on so-called "Instructional Coaches" that indicated teaching in Pleasanton schools will soon resemble "Throwdown! With Bobby Flay"
-- Discussion about the fact that there had been no PUSD published technology plan in the last 4 years since John Casey did one that ran from 2006-2009 that is on the web here Web Link
-- Chris Grant stated PUSD needs a technology plan. Admadi indicates PUSD is already "state of the art" (what?)

It is sad when a community is asked to shut up about things they think truly matter. It is sad that teachers feel scared to speak up for someone they value and respect because of fear of reprisal. I am concerned this is a small example of something bigger happening in this country where our rights and ability to speak out are being increasingly stifled and now people are becoming too scared to speak. It does not bode well for the future. Cudos to those who spoke even though they were told not to. Freedom of speech is very important.

Unbelievable- it's simple to take a sentence out of an hour presentation and turn it into something so out of context it doesnt make sense. What's more complicated is listening to the message from the coaches and comprehending the work they are doing.

Also, since you are interested and concerned, Im sure you were present at one of the tech meetings for parents and community members to give input on the new technology plan than is currently being written.

Posting inflammatory incorrect information here is a part of your hopes to improve our district?

Regarding Walnut Grove. Ahmadi was involved in doing something very similar in the Fremont School District.
She was involved in ousting the then principal (RIley) of Warm Springs Elementary School, Fremont. She was one of the best principals they have had so far. Now that I am a new resident of Pleasanton, I was quite shocked to see the same thing happen again here. Is it a coincidence to have Ahmadi involved in this again. I remember everything happening quickly with no explaination what so ever. Rumors were being spread around. None of those had anything to do with the students. My opinion is that Riley did what's best for the students and may have not obliged the board and hence the fallout. Its weird after all those years, I move to Pleasanton and find the same thing happening in Walnut Grove.