Vehicles turning right pose a danger to cyclists and pedestrians

Last week I biked to Ace Hardware, just over a mile from my home, and when I came back I thought “Whoa, that was not fun.” There are some big four-way intersections on the way there, two lanes of traffic each way filled with impatient drivers. While the intersections are well-marked and have pedestrian crossing buttons and bike lanes, I was confident that the drivers were not seeing me.

Then yesterday I was heartbroken to read about the death of a Graham Middle School student who was struck on a bike by a heavy truck that was turning right onto El Camino Real. (This accident is still under investigation and no cause has been established.)

What do the drivers below all have in common? They are turning right and looking left. You have done this. We all do this. The question is, do we also look right? 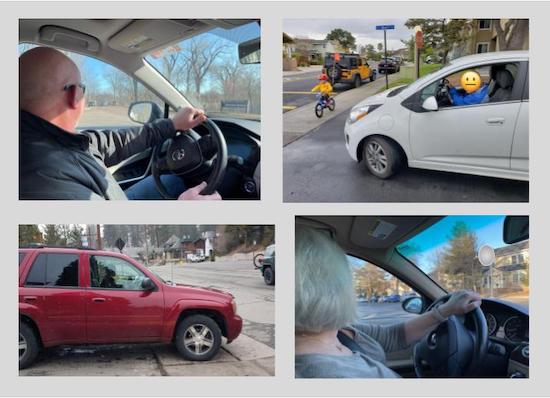 Many drivers fail to look right when they are making right turns. If they see no oncoming traffic on their left, they proceed with their turn. I have found myself doing this, for example when pulling onto Central Expressway. Yet I am keenly aware of the danger, ever since a friend of mine was struck on his bike by a right-turning car on the Cisco campus. He was thrown over the windshield, and despite wearing a helmet he suffered brain damage that transformed his life from that moment onwards.

Researchers at the University of Toronto are verifying our intuition that drivers are not looking where they should be. They have been studying driver awareness by tracking the drivers’ eye movements while navigating, and they are seeing an alarming number of “visual scan failures”. In a small study of relatively experienced drivers done in 2018, over half did not look for cyclists or pedestrians when turning right. A subsequent study found similar results, and now they are expanding their testing.

A particularly egregious instance of this problem is right turns on red lights. These turns became legal throughout the United States based in part on a misunderstanding of statistics. Numerous studies showed no statistically significant difference in collisions at intersections after right turns on red were allowed. The problem was that all of these studies were undersized, so the bar for statistical significance was very high. The results were understood to be “There is no difference” rather than “We do not have enough data to show statistical significance.” In fact, when the results of all the studies were combined, there was a statistically significant increase in injuries and fatalities from allowing right turns on red lights.

A 1984 review of literature estimated that pedestrian crashes increased by about 60% at those intersections where right on red was allowed, and cyclist crashes by about 100%. A 1995 study found that while the number of right-on-red crashes is relatively small, 22% involve pedestrians or cyclists, and nearly all of those (93%) involve injuries. In our area we have a much higher proportion of cyclists than in the four states where those results were found, and our roads and our sidewalks have only gotten busier.

The Federal Highway Administration’s Office of Safety describes the effect as follows: “Motorists are so intent on looking for traffic approaching on their left that they may not be alert to pedestrians on their right. In addition motorists usually pull up into the crosswalk to wait for a gap in traffic, blocking pedestrian crossing movements. In some instances, motorists simply do not come to a full stop.” 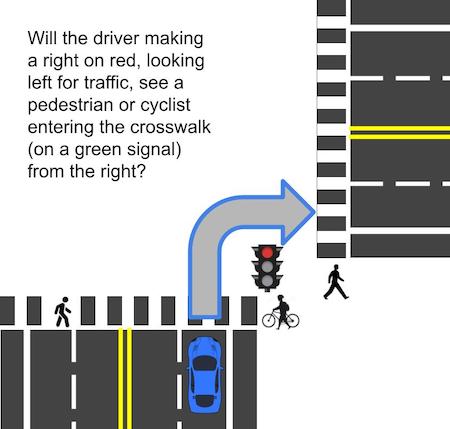 New York City does not allow right turns on red except when signed otherwise. But everywhere else in the United States they are allowed by default. As our cities have gotten more crowded, and as we are encouraging more people to bike and walk, shouldn’t we be much more careful with these turns at busy intersections? 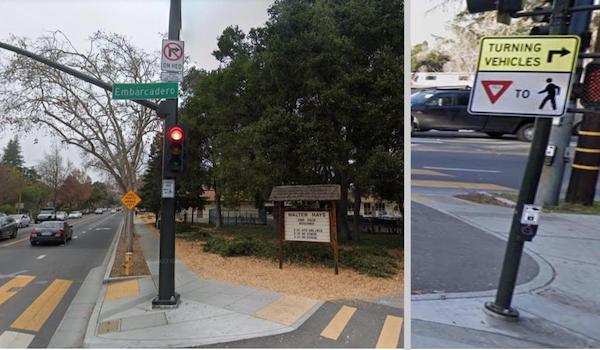 Signage at a busy intersection adjacent to Walter Hayes Elementary School prohibits right turns on red when children are present (in fine print below the main sign), and also alerts drivers turning on green to the presence of pedestrians.

Right turns on green are no picnic for cyclists either, even when they are in the bike lane, because of the danger of the “right hook”, where a right-turning vehicle cuts off a cyclist or pedestrian who is going straight with the light. 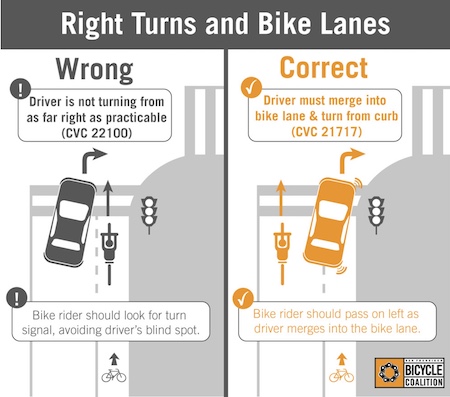 The San Francisco Bicycle Coalition recommends that cars and bikes merge into one another’s lanes at intersections. Source: sfbike.org

Efforts to reduce serious injuries and fatalities, referred to as “Vision Zero” efforts, have been designed across many cities, including San Francisco and San Jose, and to some extent the Bay Area more generally. When you see “bulb-outs” being retrofitted into intersections near you, it’s because they reduce turn speed, reduce crosswalk distance, and increase visibility. 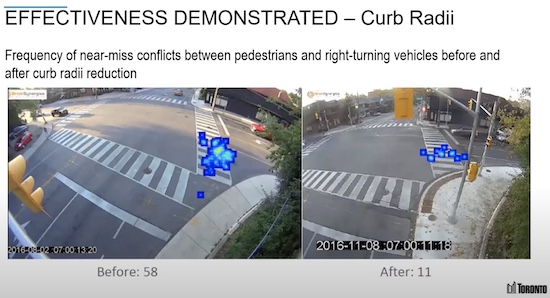 I don’t want to suggest that right turns, or even turns more generally, are the main cause of pedestrian and cyclist injuries. An analysis done in Toronto showed that the primary issue there is people getting hit while jaywalking. 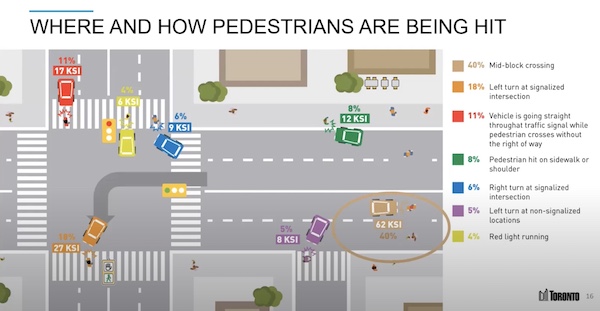 You can find a map of where accidents are occurring in your city here, and you can filter to look for those involving pedestrians or cyclists. Our cities need to prioritize speed enforcement, red-light running, and more, while also working to make turns and intersections safer.

In the meantime, we should pay attention to University of Toronto Professor Birsen Donmez, who summed up the results of her 2018 study as follows: "The takeaway for pedestrians and cyclists: drivers aren't seeing you. Not necessarily because they're bad drivers, but that their attention is too divided," added Donmez. "When crossing a street, your assumption should be that the car doesn't see you."

That is something we all need to remember as we walk and bike around town.

Notes and References
1. According to StreetsBlog, the 1975 “Energy Policy and Savings Act” required states to allow right turns on red in order to receive certain federal funds. 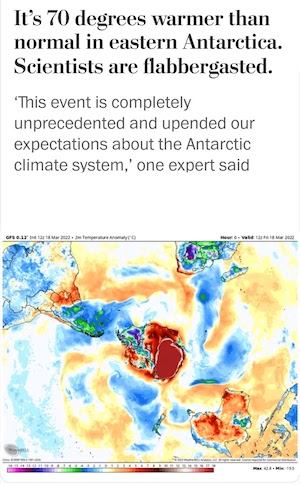