﻿ The growing appeal of "Buy Nothing" groups | A New Shade of Green | Sherry Listgarten | PleasantonWeekly.com |
Include Photos | Include Comments | Print this page | Close Window

The growing appeal of "Buy Nothing" groups

This way of assigning emissions is referred to as “production emissions” or “territorial emissions”. It is less common to report “consumption emissions”, in which emissions are assigned to the consumer. These are harder to calculate, but climate scientists pay attention when countries outsource manufacturing and the corresponding emissions. Countries like China and Russia export emissions, while places like Japan and New Zealand import emissions.

Our mid-Peninsula cities import emissions. We don’t produce much here, but we certainly consume a lot, whether it is food that we don’t grow, goods like clothing or furniture that we don’t make, or flights that emit over the oceans. While our city governments are scrutinizing the city’s territorial emissions -- largely transportation and heating -- they are looking much less at the consumptive aspect of our carbon footprint. We residents need to take the lead there.

So the blog post today is about buying less stuff. In particular, “Buy Nothing” groups on Facebook (find yours here) are becoming increasingly popular in our cities. These groups are dedicated to the free exchange of goods and services (2), with a few simple guidelines to promote good behavior. The main rule is pretty simple: “All gifts must be given for free, with no strings attached and without any expectation of reward other than the joy of giving.” Members can create one of just three types of posts: a gift, an ask, or an expression of gratitude. The groups tend to get around 20-30 posts or comments each day. 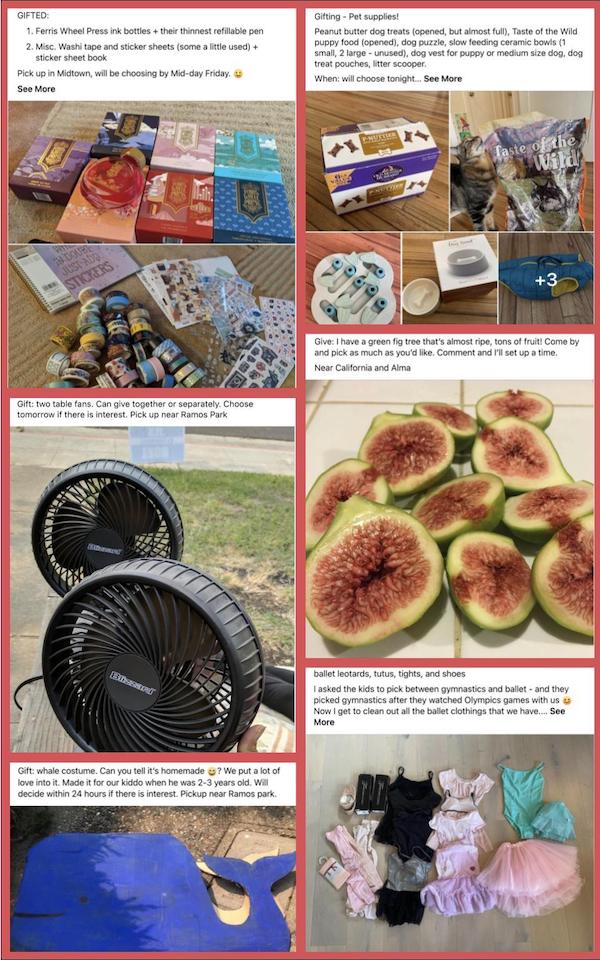 A sampling of “Give” posts from a local Buy Nothing group, ranging from pet supplies to ballet gear to a homemade whale costume.

Some of the most common items on our local Buy Nothing groups are toys, kids’ clothing, and household items. Games, for example, are a big hit. Leigh Wilson, a co-administrator for one of the local Buy Nothing groups, said that puzzles were very popular during the height of the pandemic. “My family alone probably did 30-50 puzzles. That is embarrassing!” Ellen Springer was thrilled to find a good home for a Gloomhaven game she bought that her husband wasn't excited about playing. But it's much more than just games. Erica Lewis found a walker for her mother-in-law, who will have hip surgery in October. Rachel Salata, who was combining two households’ worth of stuff, was happy to find a grateful home for a redundant second microwave. Leigh recalled a few Roombas offered on the site that were very popular. Gifts associated with hobbies like gardening and jam making have seen good uptake as well.

But the “goods” are only a part of the appeal of the Buy Nothing groups. In fact, what seems to keep people engaged is the community and camaraderie among the givers and takers. “It’s so much better than going to a store”, said Rachel. Emily Geary said the group has helped to get her out of her house and meet her neighbors. (“I had no idea so many people in Palo Alto have chickens!”) Maria Abilock, who has a long-time interest in decluttering, agrees that the group “is more than just transferring of stuff. What’s keeping me is the community. It’s a community to me.” She describes how a new family from Baltimore moved to the area and was looking for a drying rack. Maria had a nice one that she rarely used and was happy to donate. Her son will soon be starting college in Baltimore, so she asked about the city and the two families exchanged tips about places to go. Nicole Macuil-Meehan, another local co-administrator, has made many friends through Buy Nothing. She described a recent Ladies’ Night Out of Buy Nothing friends in which everyone was wearing something -- a hat, a purse, etc -- that they had received through the group. “I’ve lived here for 26 years, but I didn’t feel like I knew my neighbors. Now I go out and I know people! If I buy too many apples, I know what to do with them. It’s been really amazing. I feel more welcome. I belong more. ”

I heard these stories over and over as I spoke with group members. They expressed the joy in giving, appreciation when their loved items find a good home, and delight in the humor, creativity, and gratitude that people show in their posts. 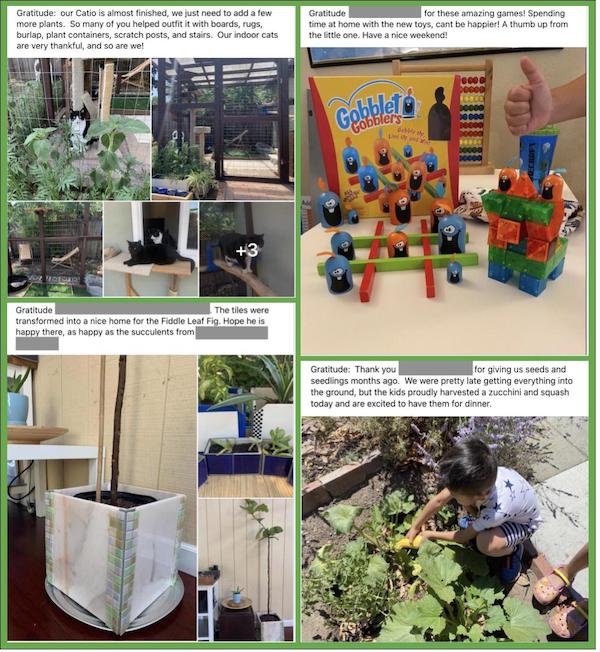 A sampling of “Gratitude” posts from a local Buy Nothing group. Clockwise from top left: a member has built a catio with many gifts from the group; a child gives a thumbs-up for the games they received; another child is harvesting squash from donated seeds and seedlings; and planters were built from donated tiles.

Ellen loves to garden. She described getting pots from the group, planting them with succulents and other plants, and then giving those away to a new set of people. “It’s a sort of metaphor for life, the give and take”, she mused. Rachel was able to give away most of the items she had available after her move, while also collecting many new items, including hundreds of river rocks for landscaping her new yard. Erica’s attitude about her neighbors shifted as a result of her welcoming experience with Buy Nothing. She had felt a little left out as a long-time renter in the city, somewhat distanced from her neighbors in their high-priced homes. But her perspective has softened: “This is a city composed of really nice people.” She has always wanted to reduce waste and extend the life of items, and has found many like-minded people nearby. “It’s been really important to me to uphold these values, and make one less Amazon purchase.” Annette Puskarich, another local co-administrator, echoes that sentiment: “There is plenty of stuff floating around already made…. People here have so many things. They can’t even put their car in the garage, with garages busting at the seams.” She says the groups exploded in popularity during the pandemic, with many people cleaning up their homes or moving. “The group in South Palo Alto grew to around 1200 members, so we had to split it.” Both of the new groups (called “sprouts” in Buy Nothing lingo) are now growing nicely.

The Buy Nothing guidelines, along with vigilant administration, are fundamental to maintaining the collegiality of the group. Many members I spoke with still use Nextdoor or Craigslist to exchange items, but start first with Buy Nothing because it is kinder and more rewarding. “It is easier to part with something when you know it is going to a good home that will appreciate it”, said Maria. Rachel philosophized that the easy give and take ultimately makes her life more flexible. It is easier to move, to upsize or downsize or relocate, when you aren’t as attached to your stuff. Instead of trying to squeeze your old furniture into a new place, you can give it up and find something that is a better fit.

I asked Rachel whether using Buy Nothing would be too time-consuming for some people. Isn’t it faster for busy people to go to a store and just buy something? “You know, that was me about a year ago,'' Rachel replied. “Pre-pandemic I was definitely in that mode. I get it. But think about it. An IKEA dining set is not cheap. This way, you can get better for less, and then feel good about giving it away when you are done with it. You save on storage costs and moving costs, too.” Nicole mentioned that it’s nice to look around your home and see so many items that you got from neighbors. It’s as if you are surrounded by gifts from friends, she said, many of which are creative, fun, or hand-made. She also added: “I’m spending half the money I would have otherwise.”

The Buy Nothing groups are a work in progress. Will they scale well to larger quantities of goods? (3) Will a few bad actors ruin the wonderful vibe? Will volunteer administrators continue to step up and spend the needed time? One concern that the Buy Nothing founders are looking at is equity, since the geographic nature of the groups might determine which groups have higher-valued goods. Leigh says that they try to draw the group boundary lines to be inclusive while also maintaining short distances. Many group territories cross busy roads, and some even cross 101. She adds that the group boundaries need to go through an approval process when they are redrawn, as in the case of splits that have happened recently. The creators of the Buy Nothing project are also creating an app that will facilitate trades across more diverse regions.

What is clear is that these Buy Nothing groups are filling a hole in the fabric of our community for a growing number of our residents. They foster connections and neighborliness while helping to reduce unnecessary purchases and extend the useful life of goods. There’s lots to like about that!

Notes and References
1. The emissions for transporting those goods internationally are not assigned to either country, but instead are tallied separately.

2. While the examples in this blog post are largely about the exchange of goods, one of the co-administrators shared with me examples of services that have been very valuable. Here are a few:

- A member posted that some finches had nested in her patio eaves and she wanted to mount a camera to video them. She needed help devising a platform for a good camera angle. Another member stepped forward with advice and materials. In gratitude, the member with the nesting finches then shared video of the birds for several weeks, from egg laying, feeding, to leaving the next for their first flight.

- A member was having a problem with the brakes on their child’s bike. They posted a request for someone to take a look at the bike to diagnose the problem. A member responded for them to bring the bike over and they would look at it. Within a few hours of posting for help, the bike was looked at, adjusted, and the child was riding it again.

3. One of the principles of these groups is that all gifts are considered equal. That is nice in principle, but it could result in a scalability problem. For example, one member was impressed when a gift of bread tags (those small plastic squares that hold a bread bag together) was taken by someone who said she uses them for knitting. That is charming, but hard to imagine at scale.

Beginning at midnight tonight (Sunday, August 22), nine National Forests will be closed through Labor Day as firefighters strain to combat the growing fires across northern California.

Comments that are written in batches by people/bots from far outside of this community are being removed.