Every now and then I mention the influence of the oil and gas lobbies in California, most recently on the design of cap-and-trade. It turns out that the City of Palo Alto Utilities has been a contributing member to one of these lobbying organizations, the American Public Gas Association (APGA), to the tune of around $20,000 a year. (1)

Your utility payments are going to an organization that fights against efficiency standards, fights against lower-emission buildings, and actively promotes the benefits of “clean natural gas”. Here are a few examples.

Fighting efficiency standards
In 2016 the Obama administration finalized new efficiency standards for large equipment (e.g., commercial boilers) that would save a substantial amount of money and emissions. The Trump administration pushed back in court, arguing that the word “will” meant “may”, and therefore they didn’t have to publish the new standards. After 3.5 years and a lawsuit, the appeals court ruled unanimously that “will” means “shall”, so the standards need to be published. (Yes, this is how our tax dollars are being used…) But APGA just a few months later filed a lawsuit to overturn those standards.

Opposing lower-emission buildings
Buildings represent about 25% of California’s greenhouse gas emissions, so we need to clean up our power and replace gas heating with efficient electric appliances (e.g., heat pumps). APGA understandably views this as a threat to the gas industry and is opposing these efforts. In 2018 our state assembly was considering bill AB 3232, which asked the California Energy Commission to come up with policies to reduce building emissions by 40% below 1990 levels by 2030. It was supported by a wide range of organizations, including: Efficiency First California, Physicians for Social Responsibility, the California American Lung Association, Natural Resources Defense Council, the Sierra Club, Earthjustice, and Fossil Free California. In opposition? APGA and other gas industry advocates: California Renewable Gas Association, Western Propane Gas Association; the California Natural Gas Producers Association. (2)

Similarly, APGA is opposing city legislation to require new buildings to be all-electric, such as we’ve seen in many local cities, including San Jose. As the now-CEO of APGA put it: “We're also concerned that as California goes, does that ... spread east? Does it go to Massachusetts? Does it go to Pennsylvania?" (3)

Promoting gas appliances
APGA has been working to promote gas appliances and help people see them in a favorable light, particularly millennials and others looking to buy homes or appliances. Their guidance for promoting natural gas barbecues: “Yes, it is about better grilling, but it is even more about how natural gas helps provide good times together.” 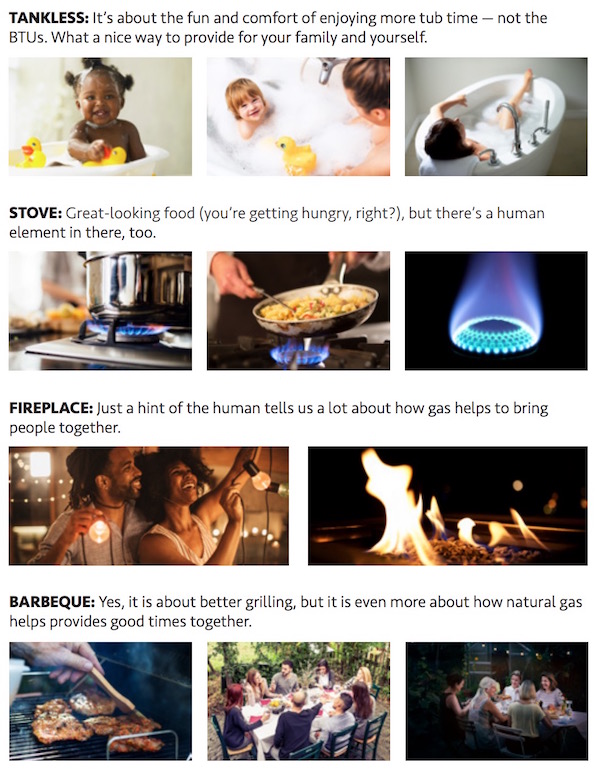 Joining forces with climate deniers
APGA is not a particularly large organization, so it understands that it needs to leverage work done by others to get the message out. “Winning the communications war is essential to our survival as an economically viable segment of the energy industry going forward.” Here are some of the organizations it aspires to get content from.

APGA aims to use content from some of the most prominent climate-denying organizations. Source: APGA Media and Public Outreach Campaign (2018)

I reached out to both the utility and the commission for comment several days ago, but have not heard back.

Notes and References
0. Thank you to Matt Vespa, staff attorney at Earthjustice, for background on APGA and a link to their 2018 Media and Public Outreach Campaign.

1. This post was inspired by a recent article in The Guardian that mentions Palo Alto and APGA, and talks more generally about how the gas industry fights climate efforts.

3. Incredibly, due in part to the influence of the fossil fuel lobby, four states (Arizona, Louisiana, Oklahoma, and Tennessee) have recently passed laws banning any city in those states from passing an electrification law for new buildings.