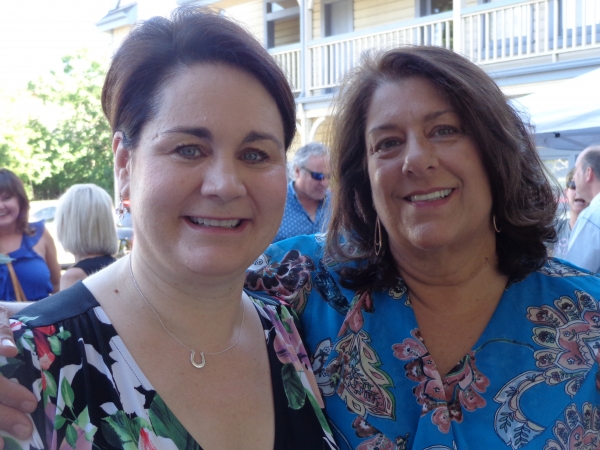 Customers of Gourmet Works celebrated its sale last month at a "Hello-Goodbye" street party for the store's 20-year owner Kathy Starkey (on right in photo) and its new owner and chocolate aficionado Kayla Mueller, assuring that the candy and gift store will continue as one of Main Street's most popular retailers.

It was a cloudy, chilly day in November 1999 when Kathy opened Gourmet Works at 420 Main St., which had been a videotape rental store. As she built the business, Kayla, a 1985 graduate of Amador Valley High School, became one of her dedicated customers.

Last January, restless in her work as a dental hygienist in the Danville office of dentist Melanie Koehler, Kayla stopped for some chocolates at Gourmet Works and asked Kathy if she had ever thought about selling her store and retiring. Kayla had the support of her husband Kerry, a Pleasanton contractor whose sideline hobby is making fine chocolates, a skill that he was eager to commercialize.

But after a few days, she reconsidered. A Pleasanton homeowner, she had spent 20 years making candy. Even earlier, she worked with her parents at Gourmet Works in Los Altos, a store her father had acquired when he retired after 33 years in a different industry.

Kathy's parents, now elderly and who also live in Pleasanton, increasingly need her help. Daughter Jessica, 32, and son Brent, 29, both Amador graduates, have their own careers. Maybe it was time to retire.

After negotiations, Kathy and her husband Gary sold their store to the Muellers. The deal included all inventory, marketing contracts, artwork and logos, an extended lease agreement with the building's owner, and "the recipes that are all my baking secrets." As part of the deal, the Muellers agreed to keep all of Kathy's employees on the payroll.

Running a popular candy store is a challenge. Kathy recalls working seven days a week for three months straight during the Thanksgiving and Christmas holiday seasons. Add to that traveling to national shows to keep marketing plans and inventory up to date.

Fortunately July, especially with the Alameda County Fair in town, provides a respite. New inventory is coming in, including a delicacy they plan to introduce: a strawberry chili jam that can be spread on grilled chicken.

Kerry, when he's not designing or building structures, spends much of his time at home cooking and baking candy, toffee, caramel delights, and all types of chocolate and milk chocolate truffles.

"He'll be in the kitchen making all of these nearly every evening and Saturday and Sunday afternoons," Kayla said. "Now he can do all this at Gourmet Works."

Gourmet Works orders its chocolate from the Guittard Chocolate Company, a 150-year-old supplier located in Burlingame. The store uses high-quality cocoa in the 71% range from Guittard that avoids the bitterness found in higher ranges.

A best-seller is dark chocolate, which contains antioxidants called flavonoids. According to recent health reports, dark chocolate actually provides health benefits, reports that have caused sales at Gourmet Works to more than double over the last five years.

Along with the store's assortment of truffles, Kayla plans to keep a shelf filled with chocolate-covered strawberries, a Gourmet Works favorite. Other specialties will include raspberry and peppermint bark and pumpkin-spiced truffles. During the holidays, customers will be treated to samples of gingerbread and eggnog.